Posted on 15 September 2011 by emrprojects | Comments Off on Translocation of the Corrigin Grevillea (Grevillea scapigera), Corrigin, WA

Corrigin Grevillea (Grevillea scapigera) is listed as an Endangered plant under the Commonwealth Environment Protection and Biodiversity Conservation Act 1999 (EPBC Act) and as Critically Endangered under the Western Australian Wildlife Conservation Act, 1950. Naturally occurring in heathland and low myrtaceae and proteaceae scrub, the species is known from 13 wild populations, mostly in highly degraded narrow road verges. Attempts were made to obtain, for its restoration, farmland adjacent to the largest known roadside population; but these attempts were unsuccessful. Therefore, translocation of the species to three other distal sites was necessary.

All of the translocation sites, each 0.2 hectare, were previously cleared bushland remnants, at various stages of regrowth and degradation. Compaction was a major problem on two sites [e.g. on an old airstrip, weed invasion particularly Capeweed (Arctotheca calendula) and Onion Grass (Romulea rosea) needed to be addressed; as well as grazing by rabbits]. 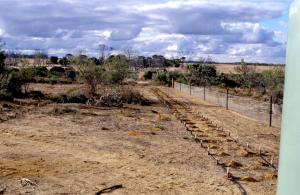 Bullaring site, vegetation skimmed off, ready for planting in winter 2000.

Works undertaken: Site works included scalping off vegetation (on one site) and partial clearing and ripping (at the other sites); followed by rabbit proof fencing, weed control (ongoing) and the installation of trickle irrigation systems. Initial planting was undertaken with tissue cultured plants, 10 clones representing 87% of the known genetic diversity. Through this process, cryostored clones have been retrieved, grown on and successfully translocated on site. Planting numbers varied from year to year, and totaled several thousand over the life of the project. 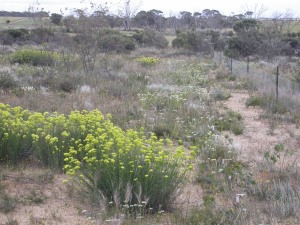 Bullaring Oct 2003, the perfect result re-sprouting and seedling recruitment of indigenous species retaining biodiversity on site and resisting weed invasion. (Corrigin Grevillea is the white flowered plant visible in the rows closer to the fenceline.)

Results to date: Plant numbers on all sites, at one time over 1800, have dramatically declined since planting ceased, as this species is a short lived disturbance opportunist – and now total about 400.  However, millions of long lived seeds have been contributed to the soil seedbank. Regeneration from the seedbank has occurred on all sites. (See figures 1-3)  Genetic decline was addressed by planting the more under-represented clones. Restoration of other indigenous species, species richness and cover varies from site to site (See Dixon and Krauss 2008). 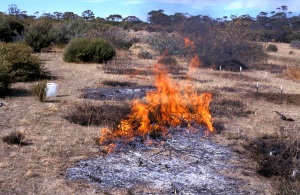 Site 1, the most degraded site, is where most of the research is carried out including burning, soil cultivation and smoking to stimulate the soil seedbank.

Lessons learned and future directions: This translocation, based on Dr Maurizio Rossetto’s PhD project, was well researched and coupled with sound horticultural practices. As a result, it has proved very successful and thousands of seeds are in long term storage. Fundamental to plant survival has been fencing to prevent predation by rabbits, water reticulation and the use of quality greenstock. Choosing a good quality weed free site is also essential for achieving a sustainable system. Spraying to prevent seed predation by weevils and caterpillars was also found to be critical to successful seed production.
Stakeholders and Funding bodies: Funding NHT, WWF. A joint project with Department of Conservation and Land Management, Corrigin Shire, Kings Park Volunteer Master Gardeners.