Holbrook producers established Holbrook Landcare Network in 1988.  It was one of the first Landcare groups in Australia, covering initially 171,000 ha of productive agricultural land in the upper reaches of the Murray Darling Basin. The organisation has directly managed grants of more than $6M across more than 85 projects to address NRM and agricultural issues including salinity and erosion control, soil and pasture management the protection of wildlife habitat.

Of the habitat projects, one of the most successful has been the “Rebirding Project”. A recognition of the importance of birds in the landscape occurred in 1994, when there was widespread concern in Holbrook over eucalypt tree dieback and the potential loss of paddock trees in the landscape. Holbrook Landcare commissioned a survey that identified 41% of the trees in the district were showing signs of dieback, and initiated (with support from our own extension staff and Greening Australia) education programs to inform landholders about the causes of dieback, including the link between cycles of lerp and other insect attack exacerbated by the loss of insectivorous birds.

In 1999 the group was successful in gaining funding for the “Rebirding the Holbrook Landscape to mitigate dieback” revegetation program through the Australian Governments Natural Heritage Trust (NHT), with the aim of drawing birds back onto farms and reducing eucalypt tree dieback.

Actions undertaken. Bird surveys were undertaken at 94 study sites in remnant vegetation on hills, flats and along creek lines. Education components succeeded in engaging the community and increased community knowledge and awareness of habitat issues in Holbrook.  The research information was used to recommend specific guidelines for the revegetation component, including ideal patch size (min 6ha), distance to remnant (1km), position in the landscape and habitat values.

The Rebirding on-ground projects (1999 – 2002) achieved 2150ha of remnant and revegetation work and put 475,000 plants back in the landscape across 118 properties – estimated at 80% of the Holbrook landholders.

Outcomes achieved. Measuring success of the program was very important to the community. A partnership with CSIRO Sustainable Ecosystems gave rise to a research project measuring bird use of plantings and remnant vegetation on local farms in 2004 to 2006.  This found that a range of bird species rapidly colonised planted areas and showed evidence of breeding activity, a positive message about the early signs of success of the Rebirding project. Tree health monitoring is ongoing by the community. Current ANU research is showing the positive benefit of the revegetation work in the landscape at the site, farm and landscape scale. The science is therefore indicating that yes, “rebirding” of the Holbrook landscape is underway, and HLN will continue to look to science to help us with the longer term outcomes for birds and tree health, and provide the feedback to us to adaptively manage our programs for the best outcomes.

The lessons and recommendations that come from the research are being applied directly to inform the design of subsequent programs such as the current major biodiversity project being managed by Holbrook Landcare – the “Slopes to Summit Bushlinks Project”. 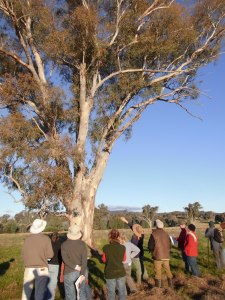 Stands of trees and shrubs established at Woomargama station, Holbrook.