Posted on 8 May 2013 by emrprojects | Comments Off on Plant communities of seasonal clay-based wetlands of south-west Australia: weeds, fire and regeneration

While the majority of seasonal wetlands in south-west Australia are connected to regional ground water, some found on clay substrates rely solely on rainwater to fill. These seasonal clay-based wetlands fill with winter rains and are characterised by temporally overlapping suites of annual and perennial herbs that flower and set seed as the wetlands dry through spring. Over summer the clay substrates dry to impervious pans. The seasonal clay-based wetlands of south-west Australia comprise a flora of over 600 species, of which at least 50% are annual or perennial herbs, 16 occur only on the clay-pans and many are rare or restricted.

These ecological communities are amongst the most threatened in Western Australia and have recently been listed under the Commonwealth Environmental Protection and Biodiversity Conservation Act as critically endangered. Over 90% have been cleared for agriculture and urban development and weed invasion is a major threat to those that remain. South African geophytes are serious weeds within these communities and Watsonia (Watsonia meriana var. bulbillifera) in particular can form dense monocultures and displace the herbaceous understorey.

Regeneration following weed control and fire.  We investigated the capacity of the plant community of such a wetland to regenerate following removal of Watsonia, and the role of fire in the restoration process.

Our study site, Meelon Nature Reserve, is a remnant clay-based wetland on the eastern side of the Swan Coastal Plain 200 km south of Perth. A series of transects were established in August 2005 and regeneration of plant community following Watsonia control and then unplanned fire was monitored until September 2011 (Table 1).

Analysis of similarity (ANOSIM) was undertaken to determine if there was significant change in species cover and composition from before Watsonia control to six years following the initial treatment. A  SIMPER analysis was used to ascertain the contribution of each species to any changes between monitoring years (Clarke & Gorley 2006).

Results. In the first year of the control program, a 97% reduction in the cover of Watsonia was recorded, but was associated with no significant change in the diversity or abundance of native flora. In February 2007, 18 months after the initial control program, an unplanned summer wildfire burnt through the reserve. In September 2007 monitoring revealed a significant increase in cover and diversity of native species in the treatment areas. Some species such as the Dichopogon preissii had not been recorded before the fire, others, such as the native sedges, Cyathochaeta avenacea and Chorizandra enodis increased greatly in cover following the fire. At the same time there was no resprouting of Watsonia or recruitment from cormels or seed.

Six years after the initial treatment the native sedges and rushes continue to increase in cover, the dominant native shrub Viminaria juncea is increasing, Eucalyptus wandoo seedlings are recruiting into the site and native grasses and geophytes are increasing in cover. The indications are that plant communities of the seasonal clay-based wetlands of south-west Australia have the capacity to recover following major weed invasion and that fire can play a role in the restoration process.

Table 2. Species that contributed to 90% of the significant change in cover and composition of species between 2005 and 2011. 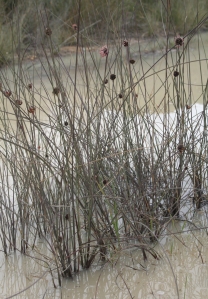