An assessment of a Dual-Frequency Identification Sonar (DIDSON) to complement fish migration studies in the Murray Darling Basin.

Posted on 14 January 2014 by emrprojects | Comments Off on An assessment of a Dual-Frequency Identification Sonar (DIDSON) to complement fish migration studies in the Murray Darling Basin.

A major limitation to studying the behaviour of fish in the rivers of the Murray-Darling Basin is high turbidity (muddy) water, which prevents direct observation of fish. The dual-frequency identification sonar (DIDSON) is a unique, high-definition piece of equipment that uses sound beams to produce almost photographic quality underwater images. For fish studies, the DIDSON can be used to study fish movements, depths, fish behaviour and number and size of fish and does not require clear water for viewing.

Broad aim and methods: This project aimed to determine the feasibility of using the DIDSON to help assess fish behaviour in two types of fishways in the Murray-Darling Basin. The trial also tested the ability of the DIDSON (and its software) to automatically count and measure fish.

Experiments conducted at three locations (Murray Barrages, Yarrawonga fish lift fishway and Lock 8 vertical slot fishway) to determine whether the DIDSON could produce images sufficient for species recognition. Individuals of known-length were also used to assess ability for automatic length-recording. The DIDSON sonar was applied under a range of conditions in the Yarrawonga fish lock during different stages of fishway cycling (including in fishways with traps deployed to assess behaviour in response to traps).  The purpose was to consider behavioural responses and implications for fishway operation (a) at the fishway exit to consider the possible fate of exiting fish, and (b) in a vertical slot fishway under different river levels to determine its influence on successful fish ascent of fishways.

Figure 1. The output of a DIDSON sonar on a laptop. (Photo courtesy Lee Baumgartner NSW DPI) 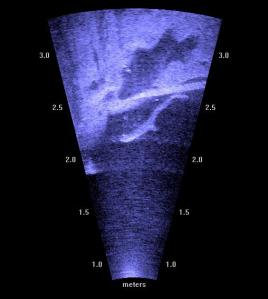 Findings: The trial concluded that DIDSON was a powerful tool for observing freshwater fish. When used in conjunction with conventional trapping techniques, the DIDSON consistently provided additional data on fish behaviour that otherwise would not be determined. However, when compared to trapping data collected, total fish numbers were frequently underestimated and estimated fish lengths were quite variable. Further development of the operating software could alleviate these problems.

Lessons learned and future directions: DIDSON was identified to be a useful tool for monitoring the efficiency of fishways and how fish behave at the entrance to fishways (e.g identifying whether they approach but not enter fishways or if they enter but not proceed any further). Such information may lead to modification of fishways to increase fish passage in the MDB. The trial also highlighted that this technology may be useful for a range of other fish research projects in Australia.