Fish communities of the Murray-Darling Basin (MDB) are highly migratory. Significant numbers of fish undertake large-scale downstream movements as adults, as well as during egg and larval life phases. With any type of migration, it is essential that fish are able to negotiate any barriers without delay or injury.

There are an estimated 10,000 barriers installed in the MDB. Two major weir designs are constructed on Australian waterways. Undershot weirs are usually operated via steel gates and water is released underneath the gates, whereas overshot weirs are usually constructed from concrete or wood and water cascades over the weir crest. Preliminary studies have shown that undershot designs, common throughout the MDB, have been shown to contribute to high mortality in larvae of some native fish species. The need was identified to determine if such mortalities occur across all species and size classes of native fish.

Broad aim and methods: This controlled field study aimed to determine the impacts of downstream fish passage of common MDB fish species through undershot and overshot weir designs at a range of flows to determine fish welfare impacts. It was hoped that this information, combined with modelling to understand hydrodynamic stresses that occur at these weirs, would help to inform development of appropriate mitigation measures.

A number of native fish species at various stages in their life history were introduced upstream of an experimental weir structure configured to function either as an undershot or overshot weir, operating at different water levels/gate openings. A fyke net was installed downstream to collect all experimental fish. Rates of injury and survival were compared between the different weir designs.

A key aspect of this project was to use computational fluid dynamics (CFD) modelling to investigate potential sources of injury. Modelling parameters such as pressure differentials, shear stresses, velocity and turbulence were used to link observed fish injuries with environmental parameters.

Findings: Passage through overshot weirs was associated with substantially greater survival in all species compared to undershot weirs. Few fish died and the main welfare issues arose when water from overshot weirs fell into shallow water, where fish became physically injured when impacting the downstream weir apron. These results indicate that the construction of overshot weirs with deep plunge pools would provide safe conditions for many fish species and sizes moving downstream.

Most Golden Perch (Macquaria ambigua) and Silver Perch (Bidyanus bidyanus) larvae, and more than half of Murray Cod (Maccullochella peelii) larvae died during undershot weir passage. Small-bodied native fish such as Australian Smelt (Retropinna semoni) and Unspecked Hardyhead (Craterocephalus stercusmuscarum) displayed extremely high mortality when passing through undershot weirs. Adult life stages of large-bodied species were also affected by undershot weirs but to a much lesser degree, with most adult Golden Perch and Silver Perch and a third of Murray Cod suffering minor injuries when passing through small gate openings. Undershot weirs were characterised by higher values of shear, turbulence and pressure changes. Modifications were made to undershot gates to try and reduce these impacts, but unfortunately none of the trials successfully mitigated effects on native fish. 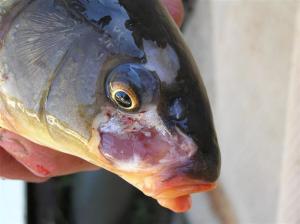 Figure 1. Injuries such as this can be sustained by fish attempting passage through an undershot weir (Photo Lee Baumgartner NSW DPI).

Figure 2. Weir designs such as this one at Balranald can impact on downstream passage of native fish (Photo Jamin Forbes).

Lessons learned and future directions: The findings of this study are particularly relevant for the MDB, given that over 80% of main channel weirs in most inland rivers now use undershot weirs. Continuing upgrades to undershot weir structures in smaller creeks and tributaries are being carried out to improve water delivery efficiency, but may substantially increase injury and mortality of native fish over a large spatial scale. Options to design and fit undershot weirs with ‘fish friendly’ flow modifications should be explored to minimise these threats to native fish. It is important that any such structure should protect all life history stages and have applicability over a large spatial scale. These modification options should be seen as a priority area for future research work.

Link: Report not yet published.