Over 700 fish species worldwide produce sounds, and the unique sounds made by fish species can often detected using underwater microphones. Most sounds are produced during courtship, for communication or identification, and they can be useful if attempting to locate fish, make abundance estimates, or direct habitat management. Prior to this project however, there had been little consideration given to use of sounds produced by fish for these purposes in Australian rivers.

Broad aim and methods: The specific objectives of this project were:

A series of trials were undertaken initially to benchmark or sound truth ambient noises within the experimental environment. In an initial trial, a hydrophone was placed into a tank with no fish to record noises. A second trial involving the same procedure but with a single fish was undertaken. The final experimental phase was to benchmark the noises from a number of fish (mixed sexes) Four fish that had been injected with hormones (two male and two female) were placed into a tank and recorded for 24 hours (Figs 1 – 2). A DIDSON camera was also set up to provide vision of the spawning fish.

Figure 1 – A sonogram of acoustic signals recorded in a tank with spawning Golden Perch. The noise could not be specifically isolated to the fish. (Courtesy of Ivor Stuart) 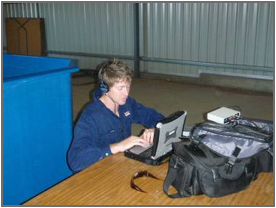 Findings: Several acoustic noises were isolated during the project and although these were absent from the controls they could not specifically be attributed to the fish. These results demonstrate that some Murray-Darling Basin native fish potentially produce noises. Further research and replication is needed to clarify the mechanism of fish sound production, individual variation in vocalisation and the utility for research and management. The sonogram data did appear to include biological noise, but the DIDSON camera proved unsuitable in hatchery tanks and further work with fixed video cameras is needed to link sound production with fish behaviour.

Murray Cod appear to provide a model species for further acoustic trials as these fish have complex social behaviour that can be observed in the semi-natural conditions of a hatchery pond. The suggested protocol is to set up a DIDSON camera or video recorder and hydrophones within the spawning drum (used by fish as a laying site). This method would allow visual confirmation of fish making noises, and the hydrophone would be placed in an optimal position to capture any vocalisations.

Lessons learned and future directions: The preliminary results of this project suggest that using a hydrophone to detect native fish is plausible, but requires further work. If further trials are successful this technology would be useful for detecting native fish spawning which would be used to determine fish habitat preferences for both conservation and rehabilitation.