Evaluating use of chemical marking in monitoring stocked fish

More than three million native fish are produced in private and government hatcheries and stocked into waterways of the Murray-Darling Basin each year. To date, little has been known of the fate of stocked fish or their impact on wild populations, in part because of a lack of suitable methods for marking small juvenile fish. The increasing use of wild fish populations as indicators of river ‘health’ was also potentially compromised by the inability to distinguish between hatchery-bred and wild fish.

Objectives and methods: A sequence of projects funded through the Native Fish Strategy sought to develop techniques for marking hatchery bred fish.

The feasibility of each of the methods was examined with particular emphasis on practicality and economic considerations for government and private hatcheries.

A range of experiments were conducted to investigate marking effectiveness, assess the influence of immersion times and chemical concentrations on mark intensity, and test for impacts of marking on growth and mortality. Experiments were also conducted to assess whether enriched stable isotopes could be used to induce multiple unique marks, which could then be used as batch marks.

Consultation took place with the Australian Pesticides and Veterinary Medicines Authority (APVMA) and Food Standards Australia New Zealand (FSANZ) to seek clarity on whether marking constituted use of a veterinary chemical product, and the legality of their use in fish that may eventually be consumed as food. 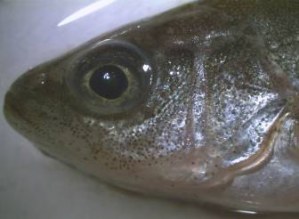 Findings: Each of the methods was found to have strengths and weaknesses. Techniques that only marked otoliths (i.e. stable isotopes) require the fish to be killed and the otoliths analysed in a laboratory to determine whether they are marked. However alizarin and calcein leave external marks that can be detected in the field without having to sacrifice the fish, a distinct advantage for most river health monitoring programs or projects involving threatened species.

A field detection kit for calcein marks was developed which included a field fluorometer for quantitative measurement of calcein fluorescence and a specialised torch and glasses set for visual identification of marked fish.

Investigation revealed that there were no registration requirements for any of the marking techniques and chemicals, and that the chemical marking techniques developed during the project can be legally applied in hatcheries provided specific processes are undertaken.

The results of the field stocking experiments showed that at least a proportion of the stocked fish survived to reach the legal minimum size in all three rivers. However, the impacts of stocking on population structure were very different among rivers. In the Edward and Murrumbidgee Rivers, the age classes corresponding to the years of stocking were comprised of 18-38% experimentally stocked fish, and these fish made only a relatively minor contribution to the total catch of Golden Perch. In contrast, stocked fish comprised up to 100% of age classes in Billabong Creek and stocking resulted in a four-fold increase in the catch rates of Golden Perch.

Lessons learned and future directions: Osmotic induction marking with calcein had no detectable effects on fish health and was found to be relatively quick and easy – taking only 15 minutes to mark up to 20,000 fingerlings. The simplicity and cost-effectiveness of osmotic induction marking make it feasible for widespread adoption in hatcheries.

Large-scale calcein marking of hatchery fish commenced in 2009, and agencies from all State and Territory jurisdictions within the MDB have initiated processes to incorporate calcein marking into their stocking and/or research programs. The results of the experimental stocking study demonstrate that stocking has the potential to strongly affect population structure and abundance of the stocked species.

Stakeholders and Funding bodies:     This project was funded through the Murray-Darling Basin Authority’s Native Fish Strategy.