Understanding how effective a new fishway is at providing passage for migratory fish is an important part of the design process. Most methods for sampling fish communities to understand movement rely on capture-based methods, which have issues with affecting fishes behaviour and thus biasing the results. Remote monitoring that is not based on capture removes such bias. Hydroacoustics (underwater sound waves) is one method of monitoring fish migration.

Project aim and methods: This project aimed to investigate a hydroacoustic method for counting fish migrating at the Murray River fishways. A 200 kHz split-beam hydroacoustic system was installed at the Lock 10 fishway in November 2007 to detect fish moving through the fishway exit channel. A dual-frequency identification sonar (DIDSON) acoustic system was also installed to provide video-quality images able to be used as a comparison with the split-beam acoustic data. 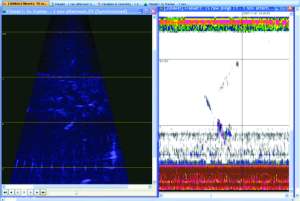 Findings:  The DIDSON system appeared to have several advantages over the split-beam system, but both were suggested to have merits for fish counting. The split-beam hydroacoustic system gave an automated fish count of up to 3.96 fish per minute moving through the fishway, but verification using the DIDSON indicated that nearly half of these fish were not detected. Data from the DIDSON system were also analysed, and an automatic fish count of up to 1.09 fish per minute was established. Visual verification over the same one-hour portion as the split-beam data found that over twenty five percent of fish recorded by the DIDSON system were not detected.

Automatic fish length detection consistently underestimated fish length, most likely due to the poor orientation of fish to the acoustic beams. However there did appear to be some relationship between acoustic target strength of fish detected with the split beam acoustic system and fish size, suggesting that this may require further investigation. The DIDSON appeared to provide fairly accurate fish measurement of fish and ongoing data collection and analysis may further improve estimates.

The project highlighted a major limitation of hydroacoustics, being an inability to discriminate between fish species, though it was noted that further experiments might assist in species recognition.

Low rates of fish migration and reduced river levels precluded the ongoing collection of data beyond the initial sampling period.

Lessons learned and future directions: The current study found that despite some limitations, use of hydroacoustics may assist in assessing migrating fish at man-made barriers, and assist in informing future fishway designs, which will have follow on benefits for the long term recovery.