Recent ecological research at the landscape scale suggests that there may be key locations, or “hotspots”, that play a disproportionate role in sustaining species and ecological communities. The identification of native fish “hotspots’ in the Murray-Darling Basin (MDB) would greatly assist managers in protecting biodiversity and maintaining important ecological processes for native fishes.

Broad aim and specific objectives: This scoping study was undertaken to help guide future investment in the identification of “hotspots” in the Basin, by conducting broad reviews of the literature and available data, and consulting extensively with a range of relevant experts to:

Figure 1. A healthy stretch of the Murrumbidgee with plenty of habitat for native fish (Photo courtesy of Jamin Forbes) 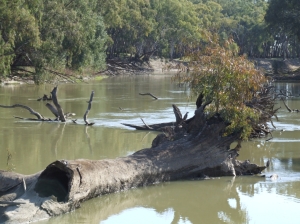 Methods:  The first stage of the scoping study was to define the hotspots concept and management applicability of the project for key stakeholders within the MDB. This was achieved through an extensive review of the background literature of the hotspots concept (both within Australia and globally) and an expert panel workshop to:

A second expert panel workshop was held to review relevant ecological information for the priority species and communities, sampling methodologies and the spatial and temporal coverage of existing data and with the aims of:

Findings: The study mainly focussed on four high priority native fish species; Murray Cod (Macculochella peelii), Silver Perch (Bidyanus bidyanus), Golden Perch (Macquaria ambigua) and Freshwater Catfish (Tandanus tandanus), though some consideration was also given to some other species of conservation concern. The study defined a “hotspot” as being “areas within riverscapes that have extraordinary importance for fish or processes that sustain native fish populations”.

The study highlighted the importance of understanding the processes underlying hotspots in order to maximise the efficiency of management actions and conservation measures to ensure cost-effective return on interventions. To achieve this, a suite of suitable metrics were developed which encompassed both direct measures of fish and measures of the ecological drivers supporting them for each of the priority species and communities.

The study concluded that insufficient data currently exists to adequately identify hotspots across the MDB. However, this project provided an approach and suitable methods to collect relevant data that could then be used with current data to determine and describe hotspots in the MDB.

It was recommended that the next step should be to investigate large-scale patterns in focus species abundance using existing datasets, determine the applicability of the hotspots concept for all metrics in a subset of river valleys, then expand on observed trends to other valleys to identify hotspots throughout the MDB.

The identification of “hotspots’ in the Murray-Darling Basin (MDB) would greatly assist managers in protecting biodiversity and maintaining important ecological processes for native fishes. This study provides a pathway by which to engage the next step in the process of validating the hotspot concept in the MDB. This will identify critically important habitat required for protecting or rehabilitation to support priority native fish species.

Stakeholders and Funding bodies:  This project was funded through the Murray-Darling Basin Authority’s Native Fish Strategy.