Assessing the effectiveness of Integrated Pest Management in Queensland

Threats and Impacts: Carp (Cyprinus carpio) are believed to impact on native fish communities by increasing turbidity, up-rooting delicate shallow-rooted vegetation, competing with native fishes and other aquatic fauna for food and space, and indirectly promoting the development of toxic algal blooms.

All of the currently available methods for Carp control have limitations. Integrated Pest Management (IPM) involves the application of a range of technologies applied simultaneously, and focussing on achieving broader objectives (e.g. improved habitat) rather than simply reducing pest numbers.

Broad aim and specific objectives: The objectives of this project were to apply a range of Carp control techniques, as an integrated package, to:

Methods: One lagoon in each catchment was selected as an experimental site for intensive carp removal, and the other was used as a reference site which received no carp treatment.

One sampling event was conducted before the carp reduction treatment and a further seven samples were performed after Carp reduction. Carp removal employed a variety of methods based on boat electrofishing, gill nets, fyke nets, angling, commercial-scale netting and traps, and screens to prevent re-entry of Carp. 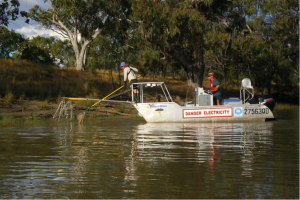 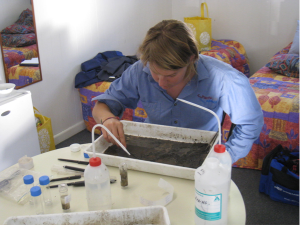 Findings: In Rainbow Lagoon (one of the experimental sites), Carp removal achieved an estimated 51% reduction in abundance and 43% biomass reduction, compared with 41% abundance and 33% biomass reductions in Warra Lagoon (the other experimental site). Reduction of Carp biomass by approximately 30 kg per ha allowed a threefold increase of more than 90 kg per ha in native fish that are eaten by larger fish species and fish-eating birds.

A succession of ‘transient’ responses to Carp reduction was observed in treatment lagoons. Whilst the exact nature of succession differed between lagoons, the generalised pattern following Carp reduction was evidenced as (i) an increase in biomass of large zooplankton; (ii) an increase in abundance of benthic macroinvertebrates; and (iii) increased biomass of gudgeons (Hypseleotris spp.) and Bony Herring (Nematalosa erebi).

These results suggest that of the full set of potential ecosystem responses to Carp reduction, only a subset may be demonstrated in individual locations because of the influence of local drivers and constraints. Due to a range of factors, the environmental responses of several variables, including water quality, macrophytes, zooplankton and macroinvertebrates, could not be linked to Carp control.

Lessons learned and future directions:Modest reductions in Carp biomass can provide significant benefits for native fish and, if continued, may be expected to translate into longer-term increases in native fish populations.