A number of fishways have been constructed under the auspices of the NFS to help reinstate passage of fish past a number of barriers in the Murray-Darling Basin (MDB). Because it is too expensive to continuously trap fishways to gather information on migratory behaviour, using an electronic monitoring unit to continuously monitor fish migrations is an attractive option for monitoring fish movement and fishway effectiveness. The Vaki Riverwatcher technology has been successfully used in Northern Hemisphere rivers to count and measure the size, date and shapes of fish which pass through an infrared scanner. Prior to this project, this technology had not been trialled on Australian rivers and species to evaluate utility for monitoring purposes.

Broad aim and specific objectives: This study aimed to perform a field study on the effectiveness of an infrared fish counter, the Vaki Riverwatcher in anticipation of wider application throughout the Murray-Darling Basin. The limitations and advantages of the system were fully explored in both controlled and field environments.

The objectives of this project were to:

Methods: Laboratory trials were undertaken to determine the ability of the Riverwatcher (Figs 1-3) to cope with different turbidity and fish migration rates. Silver Perch (Bidyanus bidyanus) were passed through the unit under a range of turbidity between 0 and 100 Nephelometric turbidity units (NTU).

Field trials were undertaken at Lock 10, on the Murray River (near Wentworth), which had been retro-fitted with a vertical slot fishway in 2006. The unit was used in conjunction with a DIDSON sonar unit and a standard fish trap, to assess the ability of the Riverwatcher to distinguish different species, count migrating fish, estimate the size of migratory fish and to assess fish behaviour in and around the unit.

Field trials were also performed to test the Vaki Riverwatcher system under river conditions. The unit was used in conjunction with other electronic monitoring gear, and also fish traps, to assess the ability of the Riverwatcher to distinguish different species, count migrating fish, estimate the size of migratory fish and to assess fish behaviour in and around the unit. 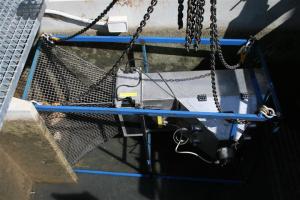 Findings: The Riverwatcher performed well and counted hundreds of migrating fish. Fish counts from the unit roughly corresponded with those caught within a fish trap upstream of the unit. However, the unit tended to underestimate fish size and some fish avoided contact with the unit.

Experimental trials on the impacts of turbidity on the Riverwatcher revealed that the unit generally overestimated fish counts during low turbidity but underestimated during high turbidity. It was also difficult to identify fish that actively avoiding passage through the unit.

Lessons learned and future directions: The Riverwatcher unit provided a powerful mechanism to monitor fish movement but often underestimated fish numbers and lengths which detracted from the quality of the hardware. If these limitations are overcome, or at least quantified, the unit would represent a cost effective mechanism to count and measure migrating fish.

The unit has a range of potential applications including within fishways, at floodplain regulators, within supply channels or other points of suspected fish movement. It is flexible in terms of operation, but is limited by the restricted width of the scanner unit. Where width or depth is an issue, additional scanner units can be linked together to create an array which can give wider spatial coverage of the target area. Provided the site of application is a known point of fish movement, obtaining count and size data on migrants would be possible and should be considered for a long-term deployment at a key site of fish migration in the Basin. Additional trials would help to determine if the gear is suitable for determining trends in fish movement over a longer time period.