Introduction. Introduced rabbits, rats and mice have caused widespread and severe ecological impacts on the native flora, fauna, geomorphology and natural landscape values of Subantarctic Macquarie Island. Major impacts include the destruction of almost half of the island’s tall tussock grassland and the depletion of keystone palatable species, a decline in the abundance and or breeding success of a range of seabird species due to habitat degradation, increased exposure to the elements and predation, as well as increased slope erosion. The Macquarie Island Pest Eradication Project is the largest eradication program for rabbits, ship rats and mice in the world.

The overall goal of the pest eradication project was to eradicate rabbits, rats and mice from Macquarie Island to enable restoration of the island’s natural ecological processes including the recovery of plant and animal communities impacted by these feral species.

Works undertaken. The Tasmania Parks and Wildlife Service developed a plan for the eradication of rabbits and rodents on Macquarie Island that was approved by the federal Minister of Environment in 2006. Following lengthy negotiations and a donation of $100,000 by the World Wildlife Fund (WWF) and Peregrine Adventures, funding of $24.6 million for the project was secured in June 2007 through a joint state and federal government agreement.

The three major components of the Macquarie Island Pest Eradication Plan after the initial planning and organisation phase were:

Following two years of monitoring without any evidence of the target species, the project to eradicate rabbits and rodents from Macquarie Island was declared successful in April 2014.  A variety of established research/monitoring projects on threatened native plant species, invasive plant species, plant communities and ten species of seabirds on Macquarie Island have been used to provide biologic data on changes in abundance, distribution and condition (see Evaluation Report 2014).

Vegetation. Vegetation recovery was well underway by 2013, when vegetation biomass on the island had increased by a factor of five to ten compared with 2011 levels.

Annual meadow grass has decreased markedly in abundance away from areas of seal and seabird disturbance, while Mouse-ear Chick Weed (Cerastium fontanum) and Garden Chickweed (Stellaria media) initially increased in abundance between 2011 and 2013 but have since declined.

The previously ubiquitous Subantarctic Buzzy has declined dramatically with competition from other species, while the previously less common Little Burr (Acaena minor) is now more prevalent.

The megaherbs Macquarie Cabbage and Macquarie Megadaisy (Pleurophyllum hookeri) and Tall Tussockgrass are beginning to spread and establish across the island (Figure 1). It is predicted that a combination of these species will become dominant in much of the coastal and slope vegetation over time, with Tall Tussockgrass already increasing in cover in many areas. The prickly shieldfern is expanding from a few remnant populations by recruitment or regeneration in former exclosures, as well as establishing in new locations. 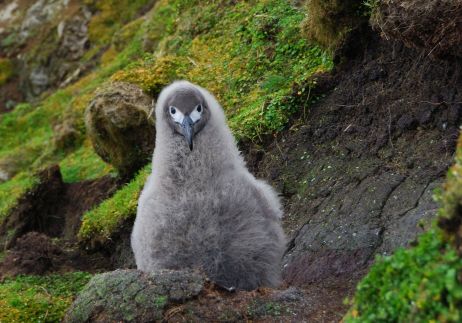 Seabirds. A combined total of 2418 individual native birds were recorded as killed via primary and secondary ingestion of broadifacoum poison during the winter baiting of 2010 and 2011. These numbers are minima, since many were predated before detected and others died at sea. Kelp Gull (Larus dominicanus) sustained the largest mortality (n=989), followed by Giant Petrels (Macronectes spp; n=761), Subantarctic Skua (Catharacta skua) (n=512) and Black Duck (Anas superciliosa) (n=156). Existing monitoring programs enable the population consequences of this mortality to be evaluated for both species of giant petrel and for skua, however baseline data for gulls and ducks on Macquarie Island are lacking. The mortality event was associated with a 25-30% reduction in the breeding populations of both giant petrel species, however ongoing monitoring reassuringly shows both populations to have stabilised and appear to have resumed the increasing trajectory that they were undergoing before the mortality event. Skua were heavily impacted, with breeding numbers reduced by approximately 50% in monitored sites. There is minimal sign of recovery for this species in recent years. The response of this species to the sudden removal of a primary prey item (rabbits) and the consequent flow-on ecosystem impacts is the focus of current investigation.

Lessons. Perhaps one of the most important lessons learned is the value of biological monitoring data, before during and after such an eradication program, which provides the basis for effective adaptive management as well as evaluation of success or otherwise.

The other salutatory lesson is the complex biological inter-relationships that exist and a need to more explicitly factor in the consequences of the ‘unknowns’ in associated risk assessments.

Acknowledgement. Thanks to Micah Visoiu for most recent vegetation data.