Brush pack experiment in restoration: How small changes can avoid leakage of resources and underpin larger scale improvements for restoration and rehabilitation

Posted on 6 March 2016 by teinm | Comments Off on Brush pack experiment in restoration: How small changes can avoid leakage of resources and underpin larger scale improvements for restoration and rehabilitation

The following experiment illustrates how relatively small changes to redirect water flow can capture water and other biological resources at a restoration site. However the process occurs not only at the micro scale but cumulates to site and landscape scales, making it a primary underpinning principles of a method of site analysis, Landscape Function Analysis (LFA) that has been applied across Australia and other countries to assist land managers counter desertification by redesigning processes that regulate the flow of resources, minimise losses and foster cycling. See http://members.iinet.net.au/~lfa_procedures/

The LFA mindset and methodology involve a purposeful change of focus from listing the biota/ species present or absent at a site, to an examination of the degree to which biophysical processes deal with vital resources with respect to stresses arising from management and climatic events.

Fig. 2. The restoration treatment was simply to build brush-packs across the contour to trap water, soil and plant litter, slowing overland outflow. This also prevented the grazing down to ~1cm. Grass plants were able to maintain about 10cm of photosynthetic tissue.

Fig 3. After 7 years. Clearly the soil properties have improved the ‘habitat quality’ for the target vegetation.

Fig 5. Detail of the brushpack after 3 years showing micro-structures capable of slowing water and accumulating resources. 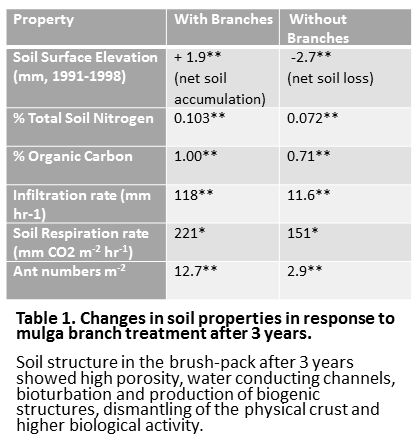 ANOTHER KEY OBSERVATION RELEVANT TO RESTORATION AND REHABILITATION

Where resources are not captured or leak out of a system, patchiness will become evident as resources self-organise around foci of accumulation – creating ‘patches’ where resources accumulate and ‘interpatches’ from which they ‘leak’.

The Golden Rule for rehabilitation is: “Restore/replace missing or ineffective processes in the landscape in order to improve the soil habitat quality for desired biota.”

Fig. 6. A grassy sward patch where the grass plants are close enough together that the water run-off is unable to generate enough energy to redistribute the grassy litter, which is evenly distributed. (The slope is from top to bottom in the image.)

There is also no evidence of sediment transport (not visible in this image). This is because of the tortuous path and short inter-grass distance. It would be possible to derive the critical grass plant spacing for “sward” function in any landscape, taking into account slope, aspect and soil texture.

Fig 7. Grassland in patch-interpatch mode, due to exceeding the critical runoff length for erosion initiation. (Slope is from top to bottom.)

Note that litter and sediment have both been washed off the inter-patch and have been arrested by a down-slope grass patch. Note the orientation of the grassy litter strands.