Introduction. Bush Heritage Australia’s (BHA) Monjebup North Reserve is a property that directly contributes to the conservation, restoration and connectivity objectives of Gondwana Link – one of Australia’s leading landscape scale restoration initiatives. Building on a solid history of revegetation projects implemented by collaborators from Greening Australia and individual practioners, the BHA management team initiated and funded a $40K Ecological Restoration Planning Project for 400 hectares of marginal farmland in need of restoration.

The specific aim of the Monjebup North Ecological Restoration Project was to 1) plan and 2) implement a ‘five star’ ecological restoration project as defined by the Gondwana Link Restoration Standards. Overarching goals included the re-establishment of vegetation assemblages consistent with the surrounding mosaic of plant communities, with a specific focus on local fauna and the restoration of habitat conditions to support their populations.

Planning and identification of reference communities for restoration of cleared land. The Monjebup North Ecological Restoration Project began with a third party consultancy contract to develop the Monjebup North Ecological Restoration Plan. This work began with the collection of detailed field data, including 120 soil survey pits collected to define the extent and boundaries between different soil-landform units occurring on the site (Fig.1). In the absence of previously defined and/or published information on local plant communities, an additional vegetation survey and report, The Vegetation of Monjebup North, was developed, which included 36 vegetation survey sites widely distributed across the surrounding vegetation (Fig.2). A total of 10 primary vegetation associations were defined within remnant vegetation on and around the site from this work (Fig.3). Additional soil survey pits were established within these defined plant communities to develop relationships between observed vegetation associations and soil-landform units. Cross referencing this information to the 400 hectare area of cleared land resulted in the delineation of seven core reference communities to guide the restoration project. These restoration communities ranged from Banksia media and Eucalyptus pluricaulis Mallee Scrub associations on spongelitic clay soils, to Eucalyptus occidentalis (Yate) Swamp Woodland associations located in low-lying areas where perched ephemeral swamps exist. 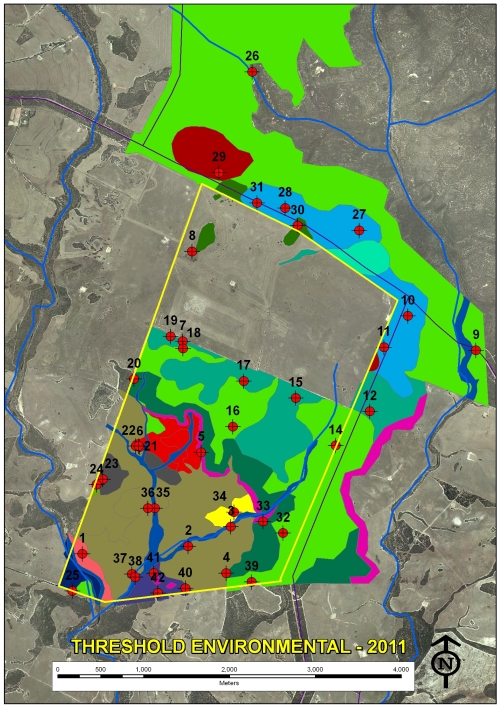 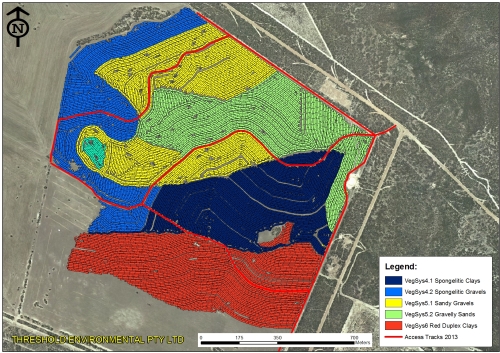 Seed sourcing. Seed from approximately 119 species were collected on and around the site for the restoration works. Seed collections for some species were collected from a number of geographically separate sub-populations, however these were never located further than 10 kilometers from site. Collections were made from at least 20 individuals for each species, and preference was made in collecting from populations which had 200+ individuals.

The primary on-ground works were initiated across four years from 2012 to 2015, starting with a 100 ha project area in 2012 (Fig.4), and a 140 ha area in the following year (Fig.5), both by Threshold Environmental Pty Ltd. A combination of direct seeding and hand planted seedlings treatments were employed, where seed mixes were developed to achieve the bulk of plant recruitment across each of the soil-land form units, and nursery grown seedlings were planted by hand for species found to be difficult to establish from direct seeding or for which stocking densities were to be more closely controlled. This work involved 13 communities and 148 species.

A number of innovative operational treatments were employed. These included grading 5 kilometers of contour banks and spreading chipped vegetation and seed pods, and 180 in situ burning patches where branch and seed material from fire-responsive serotinous species were piled and burned (Fig.6 before, Fig.7 after). Seedlings for rare, high nectar producing plant species were also planted in 203 discrete ‘node’ configurations. Habitat debris piles made of on-site stone and large branch materials were also constructed at 16 locations across the 2012 project areas.

Results to date. Monitoring collected from post establishment plots in from the 2012 and 2013 areas (2 years after seeding) showed initial establishment of 2.4 million trees and shrubs from the direct seeding (Fig.8 and Fig.9). Results of faunal monitoring are yet to be reported, but monitoring at the site for vegetation and faunal is ongoing. 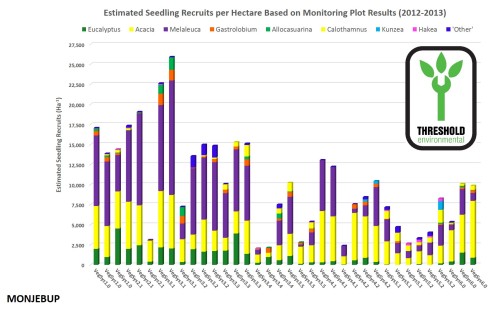 Figure 8: Graphic representation of monitoring results from 2012 and 2013 operational programs showing scaled up plant counts across the plant community systems targeted for reconstruction.

Lessons learned and future directions. The decision to develop a restoration plan in advance of undertaking any on-ground works was a key component contributing to the success of the project to date. Sufficient lead time for contracted restoration practioners to prepare (>12 months) was also a key contributor to the success of the delivery. Direct collaboration with seed collectors with extensive local knowledge also greatly benefited project inputs and outcomes.

Stakeholders and Funding bodies. Major funding for the project was provided by Southcoast Natural Resource Management Inc., via the Federal Government’s National Landcare Program and the Biodiversity Fund. Of note is also Bush Heritage Australia’s significant investment in the initial purchase of the property, without which the project would not have been possible.