Posted on 8 March 2016 by teinm | Comments Off on Integrating conservation management and sheep grazing at Barrabool, NSW

Introduction. Barrabool is a 5000 ha dryland all-Merino sheep property between Conargo and Carrathool in the Western Riverina, NSW. Native pastures are the mainstay of Barrabool, as they are of other grazing properties in the arid and semi-arid rangelands of New South Wales that generally lie to the west of the 500 mm average rainfall limit.

The majority of the property has belonged to the Driver family for over 100 years. Like many of the surrounding stations a gradual but noticeable increase in exotic species occurred during the mid-to-late 20th Century, and a decline in native species. This transition has occurred because of species being transferred by livestock movements and because sheep graze not only on grass, but also saltbush shrubs and sub-shrubs as well as seedlings of native trees such as Boree (Acacia pendula) and White Cypress Pine (Callitris glaucophylla). It is well known, for example, that the preferential and continuous grazing of Boree by sheep can turn a Boree woodland into a grassland .within a manager’s lifetime unless rest and regeneration are allowed.

In recent decades – because of the Driver family’s interest in conservation and our exposure to advances in grazing management, paddock subdivision and stock water relocation – we have developed in recent decades a managed grazing system based on feed availability, regeneration capability and seasonal response to rainfall. It was our hope that this system could improve the condition of native vegetation while also improving feed availability. 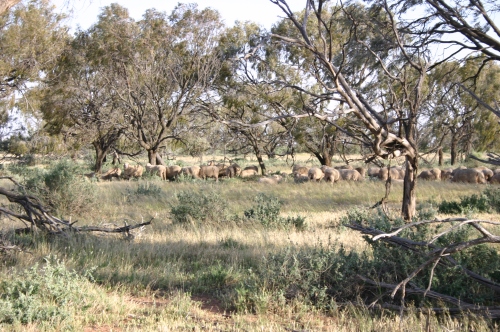 Works undertaken. Over the last 35 years we have progressively fenced the property so that it is subdivided by soil type and grazing sensitivity, with watering systems reticulated through poly pipe to all those paddocks. This enables us to control grazing to take advantage of where the best feed is and move stock from areas that we are trying to regenerate at any one time; and it gives us a great deal more control than we would have had previously.

Using our grazing system, we can exclude grazing from areas that are responding with regeneration on, say Boree country, for periods of time until Boree are less susceptible to grazing; at which time we bring stock back in. We take a similar approach to the saltbush and grasses, moving sheep in when grazing is suitable and moving them off a paddock to allow the necessary rest periods for regeneration. In this way we operate a type of adaptive grazing management. We also have areas of complete domestic grazing exclusion of very diverse and sensitive vegetation which are essentially now conservation areas.

Results. The native vegetation at Barrabool has noticeably improved in quality terms of biodiversity conservation and production outcomes over the last 35 years, although droughts have occurred, and in fact been more frequent during this time.

In terms of conservation goals Boree regeneration and Thorny Saltbush understory restoration has been both the most extensive and effective strategy. Areas of mixed White Cypress Pine woodland have proven to be the most species diverse but also offer the greatest challenges in exotic weed invasion and management. The Pines themselves are also the most reluctant to regenerate and suffer many threats in reaching maturity while many of the secondary tree species are both more opportunistic and show greater resilience to drought and other environmental pressures. The increase in perenniality of grass and shrub components of the property have been significant, with subsequent increase in autumn feed and reduced dependence on external feed supplies.

In terms of production outcomes, after the millennium drought the property experienced three seasons in a row in which there was much less rainfall than the long term average rainfall. At the beginning of that period we had the equivalent of more than the annual rainfall in one night’s fall and then went for 12 months from shearing to shearing with no rain recorded at all. Yet the livestock and the country, however, did very well compared to other properties in the district, which we consider was due to the stronger native vegetation and its ability of the native vegetation to withstand long periods without rain.

Lessons learned and future directions. While many other sheep properties in the wider area are more intent on set stockingin their grazing practices, the results at Barrabool have demonstrated to many people who have visited the property what is possible. I am sure we are also are having some effect on the management systems of other properties in the district especially in the area of conservation areas excluded from grazing.

What we plan for the future is to explore funding options to fence out or split ephemeral creeks and wetlands and encourage Inland River Red Gum and Nitre Goosefoot regeneration.Our long term goal is to maintain the full range of management zones (including restoration zones earmarked for conservation, rehabilitation zones in which we seek to improve and maintain biodiversity values in a grazing context, and fully converted zones around infrastructure where we reduce impacts on the other zones.