Posted on 13 March 2016 by teinm | Comments Off on East Trinity remediation and rehabilitation after Acid Sulfate Soil contamination, north Queensland

Introduction. The East Trinity case study describes the remediation of a severely degraded coastal acid sulfate soil site adjacent to the Cairns township in Queensland, Australia (Fig 1). The project involved extensive collaborative research into geochemistry, soil properties, groundwater and tidal behaviour, terrain modelling and flood modelling by a range of institutions. An innovative strategy known as lime-assisted tidal exchange (LATE) was used to reverse the acidification of the wetland, leading to improved water quality and health of coastal and estuarine ecosystems.

Acid sulfate soils are formed through a natural process that occurred when coastal lowlands were flooded in periods of high sea-level, leading to a slow build-up of metal sulfides such as pyrite. When these soils, normally protected by natural wetlands, are drained for farming or other development and exposed to oxygen, rapid oxidation of the pyrite occurred. This leads to a build-up of acidity in the soil as oxidation processes produce sulfuric acid, releasing toxic metals and noxious gases creating hostile conditions for plant growth. The acid also affects the availability of nutrients in the soil, creating another challenge for plant life. Rainfall events cause the acid, metals and nutrients to drain into waterways, impacting on aquatic ecosystems, infrastructure, fisheries and potentially, human health. 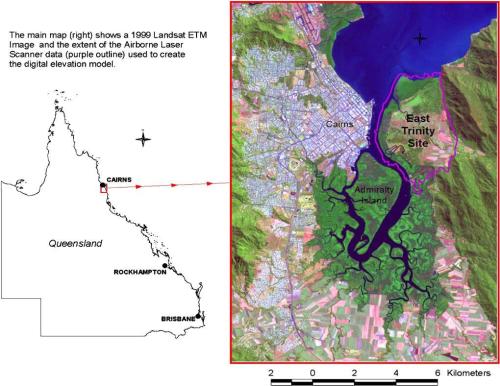 Prior condition and the degradation phase. East Trinity is a 940 ha coastal wetland situated between important estuarine habitats and a World Heritage listed wet tropical rainforest. Prior to clearing for farming, it was a mixture of paperbark woodland, tidal mangrove and salt marsh and had high ecological value for both marine and terrestrial faunal species. The area formed part of the traditional territory of the local Indigenous Mandingalbay Yidinji people.

The site was developed for sugar cane farming in the 1970s, with a bund-wall built to halt tidal inundation of the site. This drainage led to the oxidation of soil materials and a build-up of sulfuric acid in the sediments. A range of CSIRO and other reports showed that this affected 720 ha of the 940ha site. Between 1976 and 2004, it was estimated that at least 72,000 tonnes of sulfuric acid was released from the site, as well as soluble aluminium, iron, heavy metals and arsenic. Water bodies on site were routinely found to have a pH of 3.5 or lower. Aluminium levels were of particular concern, exceeding ANZECC guideline levels by as much as 6,000 times.

The discharge of acid and heavy metals led to death and dieback of vegetation (Figs 2 and 3) and had severe implications for aquatic life. These impacts were of particular concern due to the proximity of the site to the Great Barrier Reef Marine Park, with substantial evidence that acid sulfate soil runoff was discharging into reef receiving waters.

Figure 2a: Aerial view of Firewood Creek area from the 1980s showing extensive grasslands and Melaleuca leucadendra woodlands to the left of the bund wall roadway.

Remediation, rehabilitation and restoration phase. The land was purchased by the QLD government in the year 2000, with the ‘Acid Sulfate Soil Remediation Action Plan’ commencing shortly thereafter. This involved a range of engineering solutions to achieved the desired hydrology and apply the lime-assisted tidal exchange remediation strategy, at first on a trial basis. Positive results during the trial period led to the long-term adoption of lime assisted tidal exchange (LATE) at East Trinity.

The LATE remediation strategy. Management strategies for acid sulfate soils are based on the principles of dilution, containment or neutralisation, with each bringing different benefits and challenges. Containment can lead to substantial acid build up and inhibit the movement of aquatic life, whilst the addition of agricultural lime can be costly. The LATE strategy (Fig. 4) was designed to support natural processes by reintroducing tidal flows, encouraging natural systems to restore the wetlands, hence greatly reducing the costs of lime and infrastructure, as well as hands-on management requirements. Flooding the soil stimulated reducing geochemical conditions whilst diluting the acidity. The bicarbonate in seawater provided a large source of alkalinity, whilst the organic matter present provided energy for microbial reactions to take place in the soil, thereby stimulating the in-situ production of alkalinity. Agricultural lime was added to the incoming tide to support the process, and also added to the out-going exit waters to prevent acid-flush into estuarine waters.

Fig 4. The image above shows some of the key parameters improved by the LATE bioremediation strategy.

Results of the remediation project. The East Trinity site now has sediments at a spectrum of stages of remediation, with large areas fully remediated. Tidal inundation has ultimately led to a binding-up of heavy metals in the sediments and the neutralisation of acidity to a pH of 6.5, a typical pH for a subtropical estuarine environment. Following six years of gradually increasing tidal inundation, it was found that in-situ microbial and tidal exchange processes accounted for 99% of the change, whilst the addition of agricultural lime contributed less than 1%.

This greatly reduced the release of heavy metals to the estuarine environment and allowed for the re-establishment of mangrove and intertidal ecosystems (Fig. 2b).

Vegetation. Some ecological communities associated with the incursion of seawater and expansion of the tidal zones within the site have reduced while others have expanded. Mangrove communities have expanded and Acrostichum aureum (mangrove fern) fernlands have particularly increased, although some previous fernland transitioned to mangrove. Pasture areas have been largely replaced by Paperbark (Melaleuca leucadendra) shrublands and low woodlands and by the native grass Phragmites (Phragmites karka). The dieback of open forests of Paperbark impacted by the tidal areas continues, with some stands that were healthy in 2008 now in decline. Decline of low Clerodendrum inerme closed vinelands also continues in proximity to the tidal zone, though in other areas this community appears to be recovering.

Birds. A total of 136 species of birds have been observed at East Trinity since the rehabilitation began. Reports suggest that the expansion of mangrove and other higher elevation wetlands associated with the rehabilitation are likely to have benefited a number of bird species, including some internationally important shorebird species listed in agreements with China (CAMBA), Japan (JAMBA) and the Republic of Korea (ROKAMBA). Recently a new wader roosting site has emerged in mangroves on the northern boundary of the East Trinity area and it seems this may be significant in the regional context.

Future directions. The remediation of the East Trinity site has led to the area now having sufficiently high ecological function to be transferred back to Indigneous ownership and management.

The LATE remediation strategy’s regular tidal inundation will remain in place to ensure the acid sulfate soils remain protected from further oxidation; and monitoring and further research will continue into geochemical pathways to avoid degradation re-occurring.

Acknowledgements. The remediation of the East Trinity site and subsequent research has occurred due to the long-term efforts and collaborations between the Queensland Department of Science, Information Technology and Innovation (DSITI), CSIRO, the CRC for Contamination Assessment and Remediation of the Environment (CRC CARE) and Southern Cross University. Figures and data cited in this summary are derived from reports from these organisations available on request.