Posted on 28 April 2016 by teinm | Comments Off on Landscape-scale terrestrial revegetation around the Coorong, Lower Lakes and Murray Mouth, South Australia

Introduction. Located in South Australia at the terminus of the Murray-Darling River, the Coorong, Lower Lakes and Murray Mouth (CLLMM) region has immense ecological, economic and cultural importance. The landscape varies from the low hills of Mount Lofty Ranges in the northwest, through the low valleys and plains surrounding Lake Alexandrina and Lake Albert, to the plains and dunes of the Coorong in the southeast (Fig 1). These landforms had a large influence on the composition of pre-European vegetation communities in the region, with the Mount Lofty Ranges dominated by eucalypt forests and woodlands, the lakes surrounded by a mixture of mallee, temperate shrublands and wetland vegetation, and the Coorong supporting coastal and wetland vegetation communities.

The region has been extensively cleared since European settlement and the introduction of intensive agriculture (cropping and grazing), so that now only a fraction of the original native vegetation remains. This has resulted in a substantial decline in biodiversity and recognition of the area as a critically endangered eco-region. These impacts have been compounded by water extraction upstream and anthropogenic changes to hydrological regimes. The recent drought further exacerbated these environmental problems and severely affected the region’s people and economy. 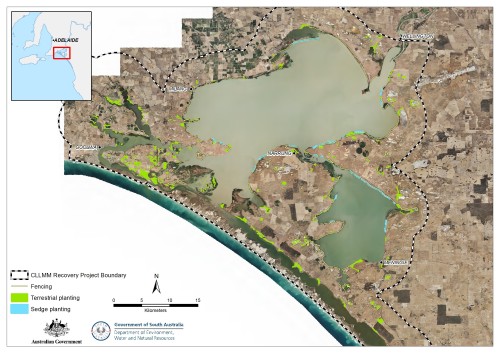 Broad aim and any specific objectives. In response to drought and other issues affecting the region the Australian and South Australian governments funded the landscape-scale CLLMM Recovery Project (2011 – 2016). This project aims to help restore the ecological character of the site and build resilience in the region’s ecosystems and communities. As a part of this, the CLLMM Vegetation Program aimed to strategically restore native vegetation to buffer and increase the connectivity of existing remnants.

Works undertaken. Three key tools were utilised to achieve these goals. First, an integrated Landscape Assessment was used to identify priority plant communities for restoration in the region. To do this, we classified vegetation types occurring in the CLLMM landscape, then identified suites of bird species associated with each vegetation type. The status and trends of each of these bird species were then used as indicators to determine the conservation priority of each vegetation type. Second, a framework was developed to identify the most appropriate vegetation types to reconstruct at a given site, depending on characteristics such as soil type and landform. This was based on the composition and structure of remnant communities and their associated environmental settings. Finally, a Marxan analysis was conducted across the region to prioritise sites for restoration works based on the aims of the program, with an aspirational target of restoring 30% of each priority vegetation type. Following an expression of interest process that made use of existing networks in the local community and the traditional owners of the CLLMM and surrounding area, the Ngarrindjeri, prioritised sites were then selected from those made available by landholders.

For each site, we developed a plan specifying the site preparation required, and species and densities to be planted. Native plants were sourced from local nurseries, ensuring that provenance and appropriate collection guidelines were followed. Tubestock was used to provide an opportunity for social benefits, including the development of community run nurseries, and due to their higher survival rates. Planting was carried out by regional contractors engaged by the CLLMM Recovery Project Vegetation Program, along with the Goolwa to Wellington Local Action Planning association and the Ngarrindjeri Regional Authority. During this program wetland restoration was also undertaken through the planting of a native sedge species, the River Club Rush (Schoenoplectus tabernaemontani), which assisted in stabilising shorelines and creating habitat for aquatic plant communities.

Results to date. By the end of the program around 5 million native plants will have been planted at 148 sites on private and public land covering more than 1,700 hectares (Fig. 1). In total 202 species of plants have currently been planted, comprising 11% overstorey, 38% midstorey and 51% understorey species. Initial results indicate that around 66% of plants survive the first summer, at which point they are well established. Woodland and mallee bird species are starting to use these revegetated areas. When compared to remnant areas of the same vegetation type, both native plant species richness and bird diversity are lower in restored habitats. However, while the bird communities in restored habitats are dominated by generalist species, specialist species such as endangered Mount Lofty Ranges Southern Emu-Wrens have been recorded in revegetated areas, providing early signs that planted areas are benefiting rarer species. The restored communities are still very young, and over time we expect these areas will start to structurally resemble remnant habitats.

Lessons learned and future directions. Resourcing of research alongside program delivery allowed us to implement a sound prioritisation process and a systematic, strategic, and effective approach to the restoration of the landscape. The capacity to collect good vegetation, soil and bird occurrence data was crucial to this. Successful delivery also required funding for site preparation and follow-up, a well-developed network of native plant nurseries, engaged community and indigenous groups, and good relationships with local landholders.

Stakeholders and Funding bodies. The CLLMM Vegetation Program is a landscape scale habitat restoration project, jointly funded by the Australian and South Australian governments under the Coorong, Lower Lakes and Murray Mouth Recovery Project. We would like to thank the Goolwa to Wellington Local Action Planning Association, the Milang and Districts Community Association and the Ngarrindjeri Regional Authority for their assistance in undertaking this revegetation. DEWNR’s Science, Monitoring and Knowledge branch undertook the initial ecosystem analysis.