Introduction. Booderee National Park is an iconic, species-rich, coastal reserve that supports a range of threatened and endangered native animals and plants. Several key management actions have been implemented to promote the conservation of biodiversity in Booderee National Park. These include the control of an exotic predator (the Red Fox Vulpes vulpes), the control of highly invasive Bitou Bush (Chrysanthemoides monilifera subsp. rotundata), the management of fire, and the reintroduction of previously extinct native mammals. A key part of work at Booderee National Park has been a long-term monitoring program that commenced in late 2002 and which has aimed to quantify the effectiveness of major management interventions, including the four listed above. The monitoring program has documented the long-term trajectories of populations of birds, arboreal marsupials, terrestrial mammals, reptiles, frogs and native plants in a range of major vegetation types (from heathland and sedgeland to woodland, forest and rainforest) and in response to fire, and weed and feral predator control. Importantly, the monitoring program has provided a foundational platform from which a suite of post-graduate studies and other research programs have been completed.

Further works undertaken. A key part of the researcher-manager partnership has been to analyse the long-term trajectories of populations of mammals, birds and reptiles in Booderee National Park. The monitoring data indicate that many species of mammals are declining, with some having become recently locally extinct (e.g. Greater Glider Petauroides volans) or close to extinction in the reserve (e.g. Common Ringtail Possum Pseudocheirus peregrinus) . This is despite populations of these species persisting in nearby reserves.  Robust interrogation of the multi-taxa monitoring data has been unable to identify reasons for these declines. Interestingly, the declines observed for mammals have not been observed to date in other vertebrate groups, including birds, reptiles and amphibians. An experimentally-based reintroduction program for the Greater Glider aims to not only re-establish populations of the species in Booderee National Park, but also to identify the reasons for the original decline. That program will be in addition to reintroduction programs already underway for other mammal species, the Long-nosed Potoroo (Potorous tridactylus), the Southern Brown Bandicoot (Isoodon obesulus) and Eastern Quoll (Dasyurus vivverinus) that used to inhabit Booderee National Park but which went extinct many decades earlier.

Additional research being undertaken in Booderee National Park has included: (1) studies of the effectiveness of control efforts for Bitou Bush and associated recovery of native vegetation and native fauna, (2) the interactive effects of fire and browsing on native plants and an array of animal groups, and (3) studies of leaf litter and other fuel dynamics in relation to previous fire history and macropod browsing. 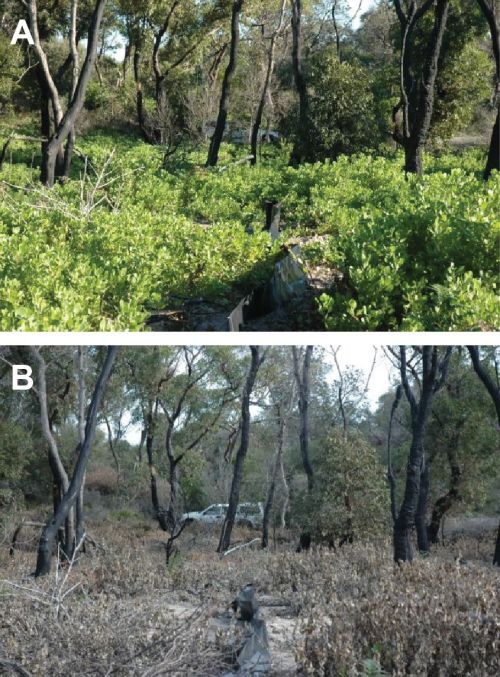 Figure 1. Key area of Booderee National Park showing an area of coastal forest before and after Bitou Bush treatment.

Further results to date. Research and monitoring in the past six years have resulted in many new insights including some of considerable value for informing restoration programs. A small subset of these findings is outlined below.

Figure 2. The Eastern Bristlebird, a species for which Booderee National Park is a stronghold. Notably, the species responds positively to management interventions to control Bitou Bush. (Photo Graeme Chapman)

Lessons learned and future directions. The work at Booderee National Park is a truly collaborative partnership between reserve managers, a university and the local Indigenous community.  A key part of the enduring, long-term success of the project has been that a full-time employee of The Australian National University has been stationed permanently in the Parks Australia office in the Jervis Bay Territory. That person (CM) works on an almost daily basis within Booderee National Park and this provides an ideal way to facilitate communication of new research and monitoring results to managers. It also enables emerging management concerns to be included as part of adaptive monitoring practices.

One of the key lessons learned from the long-term work has been the extent of ecological “surprises” – that is, highly unexpected results, including those which continue to remain unexplained. An example is the rapid loss of the Greater Glider and the major decline in populations of the Common Ringtail Possum. One of the clear benefits of this integrated monitoring-management team has been the rapid response to emerging threats. For example in response to high rates of mortality of reintroduced Eastern Quolls, control of the Red Fox was intensified within the park and greater cross-tenure control efforts with neighbouring private and public land managers have commenced. Regular evaluation of monitoring data and management actions has also enabled careful examination of the kinds of risks that can compromise reintroduction programs. These and other learnings will inform other, future reintroduction and translocation programs that are planned for Booderee National Park such as that for the Greater Glider.

Stakeholders and funding bodies. Ongoing work has been supported by many funding bodies and partners. These include the Wreck Bay Aboriginal Community who are the Traditional Owners of Booderee National Park as well as Parks Australia who co-manage the park with the Wreck Bay Aboriginal Community. Other key funders include the Department of Defence, the Thomas Foundation, The National Environmental Science Program (Threatened Species Recovery Hub), the Australian Research Council, the Margaret Middleton Foundation, and the Norman Wettenhall Foundation. Partnerships with Rewilding Australia, Taronga Conservation Society, WWF Australia, NSW Forestry Corporation and various wildlife sanctuaries have been instrumental to reintroduction programs.