Posted on 17 September 2019 by teinm | Comments Off on Ecological Restoration of Donaghys Corridor, Gadgarra, north Queensland – UPDATE of EMR feature

Introduction. Complex notophyll vine forests of the Atherton Tablelands, particularly from basalt derived soils, have been significantly fragmented and degraded by human settlement over a 100yr period. Fragment isolation results in edge effects, exotic species colonisation, loss of genetic variability and species decline. During high rainfall events, eroding streambanks on farms mobilise sediments to the receiving environment of the Great Barrier Reef. Re-connecting isolated fragments to larger forest blocks through restored riparian corridors aims to reverse these effects through adaptive management. The restoration of Donaghys Corridor is an example of adaptive management, and its establishment was a key factor in the adoption of other local corridor projects.

As reported in the 2009 features, around 20,000 plants of selected local species were established in four yearly plantings (1995/96/97/98) along Toohey Creek, creating a continuous habitat corridor between the isolated Lake Barrine fragment (500ha) and the adjacent Gadgarra section of Wooroonooran N.P (80,000ha), both being part of the Wet Tropics World Heritage Area. The corridor is 1,200m in length and 100m wide, with three rows of Hoop Pine (Araucaria cunninghamiana) planted either side of the fenced corridor, which was established on lands largely owned by the Donaghy family. On completion, the corridor was secured through the Queensland Government’s declaration of Donaghys Corridor Nature Refuge, the State’s first Nature Refuge proclaimed over an ecologically restored site.

Ongoing recovery. In 2000, a vegetation survey of 3m x 5m plots in 12 permanent transects throughout the corridor showed regeneration had occurred upon canopy closure (Tucker and Simmons 2009).  Between 1995 and 1998, 119 native species had regenerated within the transects, mainly through vertebrate-mediated dispersal. The most recent (ongoing) survey, ca.20yrs after planting, indicates that regeneration has continued, and the majority of regenerating species are again vertebrate dispersed. There has also been a measurable increase in vegetation structural complexity, and a variety of life forms are present including ferns, orchids, vines, scramblers and canopy trees.

Restored vegetation in 2000 was characterised by vegetation of even age and size classes and only a developing canopy was present (no sub-canopy). Recruitment was limited to the ground storey. Over 20yrs, total numbers of recruiting species have increased, along with canopy height, and the sub-canopy is now a distinguishable and measurable feature. To illustrate this change, species diversity and structure in two typical transects from the oldest (1995) and youngest (1998) plantings are shown in the table below. Figures are from the most recent survey (2019) and the bracketed numbers indicate comparative values in 2000.

There has also been a significant difference in the distribution of regenerating vegetation. In 2000, regeneration was negatively correlated with edge, being concentrated in the central portion of each transect. Greater structural complexity and increased shading have significantly reduced the edge effect and regeneration is now distributed equally across the entire width of the corridor. This edge-effect reduction may partially result from the three Hoop Pine rows, now ca.15m tall, planted on each side of the corridor. 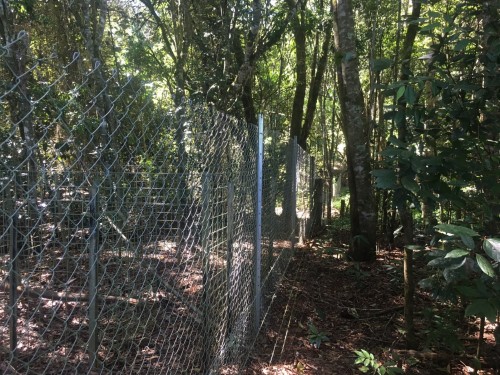 In 2006, corridor vegetation was damaged by severe tropical Cyclone Larry. Most stems lost crowns and some waters’ edge stems were permanently bent by floodwaters, but vegetation recovery was rapid and no weed invasion occurred. This infers a measure of resilience by restored vegetation to disturbance, and the distribution of regeneration described above supports this inference.

Anthropogenic disturbance has been more interventionist and not aligned to the original concept adopted by government, landholders, scientists and the community when the project commenced in 1995.  In 2017, the corridor’s upstream neighbour, with support from the DES but without consultation with the Donaghy family or other affected landholders, erected a chain mesh fence 250m long and 1.8m high across the western end of the corridor (see Figure 1). This is part of a larger fence which completely encloses mature forest at the western end of the corridor, including corrugated iron placed across the bed of Toohey Creek. Enquiries revealed the fence is part of an enclosure for a Cassowary (Casuarius casuarius johnsonii) rehabilitation facility, operated by Rainforest Reserves Australia (RRA) under a commercial arrangement with the Queensland Government.

Enhancing landscape permeability was the key reason for undertaking the Donaghys Corridor project, and the endangered Cassowary was a key target species; 53 Cassowary food plants were included in the original planting matrix of 100 species to encourage corridor utilisation. The Queensland Government notes that corridors are a key strategy in Cassowary conservation. In addition to blocking the movement of terrestrial vertebrates such as Cassowaries, Pademelon (Thylogale stigmatica) and Musky Rat Kangaroo (Hypsiprymnodon moschatus), construction of the enclosure has inadvertently fenced in a number of animals whose territories included part of the enclosure.

DES has advised that the fence is temporary and will be removed when restoration plantings on RRA lands are ‘sufficiently well-developed’ to support Cassowaries being rehabilitated.  It is unknown, however, when or through what processes this removal will occur. Resolution of the issue is anticipated.  However, such actions highlight the pitfalls associated with single-species conservation, and potential conflicts that might arise when responsibility for management of endangered species moves from the State to the non-scientific, commercially-focused private sector. Whilst iconic wildlife e.g., the Cassowary, can be effective in harnessing community and landholder participation in restoration, here it is clear that decision making and communication has been far from optimal, which may well lead to landholder and community disillusionment. In this case, the fence has also disrupted ongoing monitoring and evaluation. Planned re-survey of terrestrial vertebrate colonisation and movement has now been cancelled, given the unknown effect of the fence on wildlife passage and the behaviour of animals inadvertently trapped within the enclosure.

Lessons learned.  The project shows that sustained regeneration of native species can be achieved in restored tropical vegetation, along with increased structural complexity and functional resilience to natural disturbance.  However, the fencing incident shows that dysfunction in a restoration project can arise from totally unanticipated causes, potentially undoing well-established partnerships between government, community, scientists and landholders.