Posted on 17 September 2019 by teinm | Comments Off on The biodiversity benefits of Greening Australia’s Saltshaker Project, Boorowa, NSW – UPDATE of EMR feature 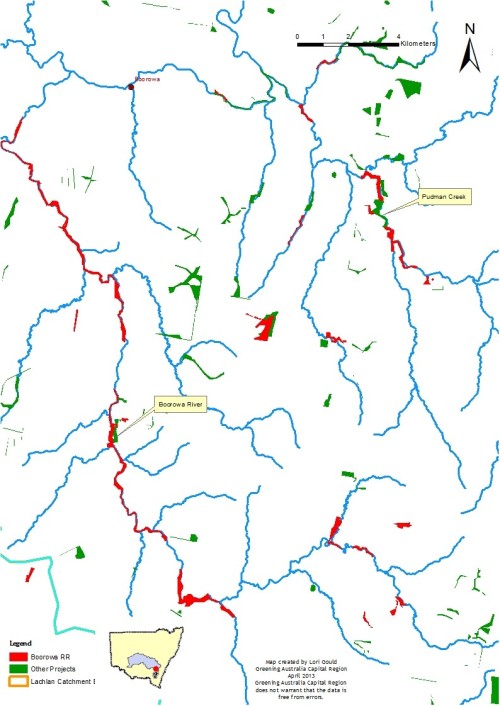 The Boorowa catchment in central NSW, like most of the wheat-sheep belt of eastern Australia, has been extensively cleared for agriculture.  Remnant woodland cover is less than 10% and highly fragmented into small patches, often less than 20 ha. As described in the 2004 article, there has been a documented decline in biodiversity across this region linked to declines in landscape function including dryland salinity and eucalypt dieback. In response to these declines, farmers in this catchment have been involved in land rehabilitation projects for over 25 years.  Many of these projects have been facilitated by Greening Australia, a national non-governmental organisation focused on protecting and restoring native vegetation.  Pioneering projects in the 1990s were often small in scale and lacked landscape scale targets.  To address this, Greening Australia collaborated with CSIRO to develop guidelines for catchment scale “enhancement activities” for the $1.8 Million “Saltshaker Project” that carried out ground works as described in Box 1 of the 2004 article (reproduced below). The project was based on a $845,000 grant from the Australian Government’s Natural Heritage Trust program and $1 Million in in-kind support from farmers, the Boorowa Shire, Boorowa Landcare and Greening Australia. This project ran for just two years (2000-2002), but it was hoped that the project would provide strategic guidance for decades to come.  This appears to be the case.

During the Saltshaker project, bird surveys were conducted within 54 discrete patches of remnant woodland.  Bird species were identified that were particularly sensitive to loss of habitat area, simplification of habitat structure, and increase in habitat isolation. The Eastern Yellow Robin was the focal species for this catchment. It generally occurred in woodland patches larger than 10 ha that were no more than 1.5 km from other patches at least 10 ha in size, and had at least a moderate structural complexity made up of a healthy overstorey of eucalypts with an understorey of regenerating trees, shrubs, tussock grasses and fallen timber. The Saltshaker project predicted that many other woodland birds would co-occur if the habitat requirements of the Eastern Yellow Robin were met by patch and landscape scale enhancement activities.

Further works. The Saltshaker project was followed by many others since 2002. The largest project was “Boorowa River Recovery” that began in 2005 as a partnership managed by Greening Australia with the Lachlan Catchment Management Authority and the Boorowa Landcare Group.  Through a total investment of almost $2.2 million (in-kind included), this project rehabilitated or protected 640 ha of riparian area along 80 km of river including a continuous 29 km stretch of the Boorowa River above the town water supply dam (Figs 1 and 2). It involved more than 60 land managers who implemented on-ground works described in individual ten year management contracts. On-farm project size averaged 11.6 ha.

Other projects funded by a diversity of sources, particularly the Australian Government, have protected an additional 88 ha of woodland remnant, enhanced 353 ha of remnants, and revegetated 425 ha of native vegetation within the catchment.  Projects included Whole of Paddock Rehabilitation (WOPR).  All project activities linked to funding have been recorded in a detailed project management database held by Greening Australia. These additional projects were consistent with the enhancement activities recommended by the Saltshaker Project and described in the EMR feature. 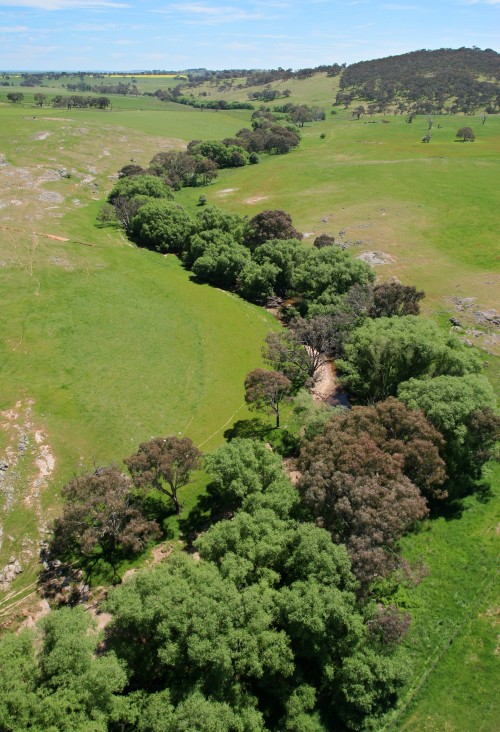 Outcomes. There has been no comprehensive follow-up to the 2001 bird surveys across the Boorowa Catchment.  However since then, there is now a large and comprehensive scientific literature demonstrating dramatic increases in woodland birds in the revegetation areas in this region of southeastern NSW (reviewed in 2018). Most all the conservation and restoration activities in this catchment have likely led to an increase in woodland birds over the past 20 years.

Of all the Boorowa projects, the Boorowa River Recovery projects had sufficient funding for monitoring outcomes six years after project activities commenced. A sub-sample of 20 sites out of a pool of 47 were monitored for improvements in vegetation cover and density, macroinvertebrate abundance and stream bank stability. Planted shrub cover generally doubled at all sites as expected. Macroinvertebrate scores did not differ between treated and control sites, though activities did appear to improve stream bank stability (an indirect measure of reduced erosion).  Subsequent monitoring 12 years on showed further improvements in ecosystem function.

Since the Saltshaker Project finished, there has been no systematic monitoring of the hundreds of woodland remnants protected and enhanced by this project and subsequent ones.  However, landholders and staff anecdotally report indicative improvements in vegetation cover and wildlife habitat on the sites, and we can infer from a 2008 study that included woodland sites in the Boorowa Catchment, that significant ecological improvements are likely from fencing out livestock from woodland patches. This study found improvements included greater native floristic richness, native groundcover and overstorey regeneration within fenced sites compared to unfenced sites. Similarly, a 2009 study found that woodland sites in south eastern Australia, with livestock grazing removed, had a greater abundance of beetles and the opportunist ant functional group, a faster rate of litter decomposition, greater native plant richness, greater length of logs, and a better vegetation condition score.

Lessons learned. Long-term action with short-term funding. Natural resource management projects have been ongoing in the Boorowa catchment for over 25 years. But no single project has been funded for more than five years. This is the reality of natural resource management (NRM) in much of Australia.  Government NRM programs come and go with election cycles, but fortunately the commitment of landholders and local organisations persists.

Partnership model. All the projects before and after the Saltshaker Project have involved landholders working collaboratively with local agencies administering the diversity of funding. Most projects had a steering committee that proved a good way for stakeholders to have input through all stages of project, which was particularly important during project planning. Idealism needed to be balanced with practicality so bureaucracy was minimised while maintaining accountability. Good communication that recognised that no single view was more valuable than another was important, although full consensus was not always possible. Trust was enabled when processes were developed collectively. Skilled coordinators needed a clear understanding of their roles and care taken to not get involved in local politics.

Assessing outcomes. Developing a highly predictive understanding of ecological outcomes from NRM activities in catchments like Boorowa is a scientifically complex, expensive and long-term process. The confidence we can now claim for an increase in abundance and diversity of woodland birds in the Boorowa catchment stems from two types of monitoring. First is project monitoring of outputs like the 425 ha of revegetation known to have been established in the catchment. We know this from Greening Australia’s project management database (unfortunately there is no national database for this kind of outputs),  although satellite imagery should be able to pick up this output once plantings have a dense enough canopy. It is essential to know when and where project outputs like revegetation have occurred in order to then design scientifically rigorous studies to research ecological outcomes like increases in flora and fauna diversity and abundance. We have confidence that wildlife is colonising revegetation because research groups have conducted sophisticated statistical analyses of wildlife data from woodland revegetation in nearly 200 sites across south eastern Australia for over 15 years (summarised in a 2018 study).

Gaps in understanding. We know a lot about the ecological and social outcomes of NRM activities, but much less about improving the cost effectiveness of outputs such as revegetation and understory enhancements(see 2016 review). There are no recent published benchmarks on how much revegetation should cost in the face of variable climatic conditions, soil types and terrain.  More revegetation case studies need to be documented, but they need to include an accounting of costs.  The Australian restoration challenge is vast, funding always limited, so practical research and transparent accounting is sorely needed to reduce the cost of ecologically effective restoration.

Continuous re-learning. The many and diverse projects in the Boorowa Catchment are typical of NRM activities in Australian woodlands over the past 25 years. Each project has involved different agencies, many no longer exist or have changed their names (e.g. Catchment Management Authorities have morphed into Local Land Services in NSW). Each agency, including NGOs like Greening Australia, have a natural turn-over of staff. For example, only one staff member of Greening Australia involved in Saltshaker remains with the organisation.  Landholders tend to remain longer, but they too retire, sell out, and move on. Like education, every new staff member and every new landholder needs to learn the complex processes of successful catchment repair. This learning needs to be hands-on, hence funding for NRM activities and extension is needed in perpetuity (just like education). But experiential learning needs to be complemented with a diversity of learning resources such as the EMR journal, easily assessable reports (too many have disappeared from Government websites) and new media such as YouTube videos. Most importantly, communities of practice need to be perennially nurtured by a diversity of practitioners, experienced and less so.  There is much still to be learned and shared.

Stakeholders and Funding bodies:   The primary funding bodies for projects in the Boorowa catchment were the Australian Government, TransGrid, Alcoa Australia, the NSW Environmental Trust, and the former Lachlan Catchment Management Authority. These external funds were complemented by a diversity of in-kind support provided by farmers, Boorowa Shire Council, and other community members of the catchment.