Posted on 18 September 2019 by teinm | Comments Off on Restoration of Wollongong’s Tom Thumb Lagoon 25 Years On: UPDATE of EMR feature.

Introduction. The 2005 feature was drawn from restoration work my students and I became involved in during the early 2000s at Tom Thumb Lagoon (TTL) – an estuarine wetland close to Wollongong’s CBD and adjacent to the Port Kembla industrial area and harbour. By that point Wollongong City Council (WCC), the Bushcare group Friends of Tom Thumb Lagoon (FTTL), industry, Conservation Volunteers Australia (CVA), and many volunteers had been variously working on the site since the early 1990s. After decades of impacts from industrial development, waste disposal, and neglect, this significant restoration effort encompassed removing landfill, reshaping the wetland with channels and shallow benches, revegetation, weeding, and the construction of access and viewing points. By the time we became involved and I wrote the 2005 paper, TTL and the adjacent Greenhouse Park (GHP; Fig 1), were substantially revegetated, aesthetically improved, and the saltmarsh wetlands were seen as ecologically valuable. Participants and stakeholders in the restoration project perceived that substantial progress and improvement had been made. They also perceived, however, that the project suffered from some issues common to such endeavours such as a lack strategic planning and monitoring of ecological outcomes.

Since this time, restoration and other work has continued at TTL and at GHP. The story of what has happened, however, is one of the dynamic and contextual nature of sites such as this. This is true in a biophysical sense of ongoing vegetation change, particularly the spread of Grey Mangrove (Avicenna marina), a native plant previously not occurring on the site but planted for perceived environmental benefits either in the 1990s, or around 2000. This spread (into what was previously saltmarsh and mudflats) arises from past decisions and, while providing benefits, is now potentially causing new problems as well as continuing debates about choices in restoration.  The social context has also been dynamic and influential, as priorities have shifted, as the funding environment has altered, and as the people and groups involved have changed. Finally, Tom Thumb Lagoon remains affected by the legacy of the industrial history of its location. Past waste disposal practices in the absence of regulation have led to pollution problems that have become of greater concern since the early 2000s.

Activities at Tom Thumb Lagoon and Greenhouse Park Today. The wetland area itself is adjacent to a capped waste disposal site that operated from the 1940s until the mid-1970s. This area is known now as Greenhouse Park and is being managed and developed as urban green space with more focus on fostering urban sustainability practices; any restoration work is nested within these foci. TTL and GHP were always associated through overlap between FTTL and GHP staff, and GHP facilities were a base for TTL activities. Today, however, personnel have changed, FTTL no longer exists and its key members are no longer associated with TTL, and TTL/GHP are managed as one site to a greater extent. The result of these factors, and of the achievements already made at TTL, have been a shift towards an emphasis on activities at GHP and a change in TTL activities from active restoration to maintenance. It is now GHP volunteers and associated WCC staff who undertake and oversee work at TTL. At GHP WCC has expended considerable resources in tree planting and expanding a permaculture garden. There is a shelter, outdoor kitchen, and pizza oven for volunteers, WCC and Wollongong firms compost green and food waste, and there are hopes for public, tourism, and event use. Around ten volunteers work at the site weekly. For the GHP staff and volunteers, activities at TTL itself today are largely limited to weeding, picking up litter, and feral animal control. Weeds and litter remain problems, partly due to TTL’s location at the bottom of an urban catchment. In addition, since 2005, frog ponds were installed at the eastern end of TTL for the endangered Green and Golden Bell frog (Litoria aurea), however, it is not clear if the ponds are effective. The non-native Giant Reed (Arundo donax) also remains well established at this end of TTL despite control attempts.

Shifts in support have meant that CVA bowed out of work at TTL/GHP in 2012. Previously their involvement had been via a wetlands program that relied on support from both industry (including Bluescope and NSW Ports, both operating adjacent to TTL) and government programs. Until 2012, in conjunction with WCC, CVA were revegetating the southern slopes of GHP (marked A in Fig. 1) and were removing weeds and litter from the saltmarsh. However, the funding that CVA relied on declined such that CVA was unable to continue at TTL/GHP. 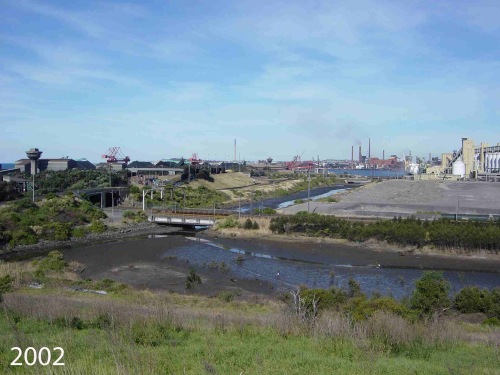 The Mangroves are Coming. Apart from further revegetation at GHP, the most significant vegetation change at TTL has been the spread of Grey Mangrove. While approval to thin this species has been obtained in the past and some thinning did occur, it has not mitigated their current spread and density. Grey Mangrove spread is clearly seen for the period from 2002 to 2019 in Fig 2 which shows the eastern end of TTL and the southern end of the channel known as Gurungaty Waterway. Aerial photos further reveal changes from 2008-2017 where the largely east-west spread of mangroves along channels in TTL can be seen (marked B in Fig 1). Significant spread can also be seen north-south spread along Gurungaty Waterway over this period (marked C in Fig 1). As the 2005 paper records, not long after Grey Mangrove was planted in the late 20th or early 21st Century, its expansion was  soon causing concern for its consequences for the site’s mudflats, saltmarsh and tidal habitats although it appears to have largely remained confined to the channels and has no doubt generated some environmental benefits. In terms of its consequences on bird habitat, the long observations of local birdwatchers suggest that the expansion of Grey Mangrove has reduced the incidence of waders and shorebirds, particularly Black Winged Stilts (Himantopus himantopus) and also waterfowl and herons. Nonetheless, observers report that Grey  Mangrove colonisation is providing habitat for other birds, such as the Sacred Kingfisher (Todiramphus sanctus), the Nankeen Night-Heron (Nycticorax caledonicus), and the Striated Heron (Butorides striata). Elsewhere across more upland areas of TTL and GHP, the expansion of tree planting across GHP and TTL has seen a shift to birds favouring woodland habitats.

The expansion of Grey Mangrove is also implicated in flood risk, especially for the catchment of Gurungaty Waterway. A 2019 review of the Wollongong City Flood Study, suggests that low elevations and channel infrastructure, combined with sedimentation and flow limitations associated with the now dense mangroves (Fig. 3), have increased the likelihood of flooding in the urban catchment. 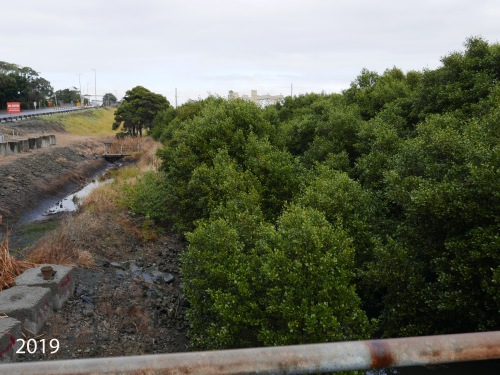 Industrial Legacies. The 2005 paper notes that saltmarsh restoration was an important part of the TTL work and that stakeholders saw the saltmarsh as a significant ecological element of TTL. Since 2004 coastal saltmarsh has been listed as an Endangered Ecological Community in NSW. From 2006, saltmarsh degradation prompted WCC to monitor the saltmarsh and analyse groundwater and soils.  This showed that the degradation was likely associated with ammonia leaching from the tip and causing nitrate pollution, and also with a hydrophilic layer of iron hydroxide in the soil causing waterlogging and contaminant absorption. The possible origins of this layer include past waste disposal practices from metal manufacturing.

These, however, are not the only legacies of past unregulated waste disposal and industrial activity. TTL is now a declared site of ‘significantly contaminated land’ by the NSW EPA. The 2018 declaration notes that site is contaminated by ‘polycyclic aromatic hydrocarbons (PAHs), petroleum hydrocarbons and other mixed contaminants from multiple sources including coal tar and lubricant oils’. At TTL elements of these can be visible as a film on the water surface and are among the substances leaching from GHP. Such substances are carcinogenic and exposure can cause a range of health problems. The presence of these materials in the groundwater has been known since the 1990s but from 2013 WCC began to monitor and map these materials. Monitoring points were installed along the wetlands at base of the old tip. Various remediation options for these contaminants, as well as for the nitrates and iron hydroxide layer, were proposed but action was not taken at this time for various reasons including disruption to the wetland, costs, and uncertainties regarding pollutant interception. As of 2019, the site is subject to a ‘Voluntary Management Proposal’ by WCC which includes the preparation of a remediation action plan by late 2019.

Future Directions. The last fifteen years have seen some aspects of restoration, such as tree planting, proceed and expand. By some measures this is continued progress of the original project. TTL/GHP is now a well-established urban green space with environmental and amenity value. However, concerns from the early 2000s about volunteer succession, the absence of a catchment approach to management, and the need to think more strategically about ecological trade-offs between management options have been realised to some extent. The spread of Grey Mangrove is the clearest example of this. In part, some of this is perhaps inevitable for a site with the history and setting of TTL/GHP; the management context has changed, participants and stakeholders have changed, and difficult legacy issues have assumed greater prominence and cost. Nonetheless, the challenge to manage the site with a clear strategy and goals remains.

Acknowledgements: For assistance with this update, I am indebted to several past and present WCC staff, particularly Mike McKeon. I was also helped by Adam Woods, formerly of CVA, and birdwatchers Penny Potter, Terrill Nordstrom, and David Winterbottom.