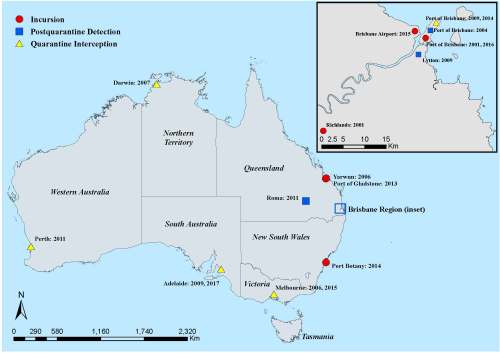 Introduction. The highly invasive Red Imported Fire Ant (Solenopsis invicta Buren) was officially identified in Brisbane, Australia in 2001. A nationally funded eradication programme began in that year and is ongoing. As of 2015, five known incursions – determined by genetically assigning population origin – had been identified across Queensland and New South Wales. In our paper we highlighted that two of these populations have been officially eradicated, and that eradication was still considered feasible for the remaining three.

Further work undertaken. In 2015, modelling showed that the extent of the southeast Queensland infestation had been delimited with a 99.9% level of confidence. Delimitation was achieved in part using newly developed remote sensing technology, which enabled large areas to be rapidly surveyed for Red Imported Fire Ant at affordable cost, and with the assistance of the public in looking for and reporting suspect ants. While this does not guarantee that eradication will ultimately be achieved, or that delimitation failure will not recur sometime in the future, establishing that the invasion has been delimited is an essential prerequisite to the ultimate success of the programme. In 2016, an independent review of the operation and management of the programme and of the tools and strategies it employed concluded that eradication was still technically feasible, cost-beneficial and in the national interest, and that efforts should continue.

In 2017, a national cost-sharing consortium of Federal, State and Territory governments approved funding of $A411 million for a new ten-year programme to finish the job.

Further results to date. We confirm that the infestations at the Port of Gladstone in 2013 and Port Botany in 2014, reported in our 2016 paper as still undergoing eradication treatment, have now officially been declared eradicated (see Table 1). Since then, there have been two additional incursions in southeast Queensland; one at the Brisbane airport in 2015 and another at the Port of Brisbane in 2016 (see Figure 1).

Genetics analysis revealed that both of these detections were new incursions and not related to existing or previous populations in Australia. Although only a few nests were found, the presence of winged reproductives in these nests signalled the possibility that there may have been dispersal by flight prior to discovery. Consequently, a full eradication response was mounted for each incursion. These responses entailed destruction of any detected nests using a contact insecticide and surveillance out to a radius of 5 km to determine the extent of the infestation. Following this, six rounds of treatment over two years were applied to a radius of 500 m around detected nests using baits containing insect growth regulators. At the completion of treatment, two rounds of surveillance, one year apart, were conducted using odour detection dogs with no ants found. Brisbane Airport was declared eradicated in 2019, and declaration is pending for the Port of Brisbane.

Lessons learned and future directions. Genetic testing continues to be one of the programme’s most valuable tools in the effort to eradicate Red Imported Fire Ant from Australia and has broader application for other pest eradication programmes. The 2016 Port of Brisbane incursion was shown to have originated from Argentina and was therefore not a remnant from the original 2001 incursion at the Port, which came from the southern United States and whose genotype has not been detected in Australia since 2005. Additionally, genetics showed that it was unrelated to the 2006 incursion at Yarwun or the 2014 incursion at Port Botany, Sydney, both of which came from Argentina. Without such information, the programme would be unable to prove that these incursions were not the result of treatment failure or movement from existing populations in Australia.

As mentioned in our 2016 paper, one of the features characteristic of successful eradication programmes worldwide is that resources must be adequate and there must be commitment to see the project through to completion. In Australia, inadequate resourcing at various times in the programme’s history has threatened the possibility of eradication success. This was most notable in 2006 when, with eradication seemingly on track, a significant downsizing of the programme occurred just prior to the discovery in 2007 of major new infestations outside the known infested area. There was no commensurate increase in resourcing to deal with these finds and for several years the programme adopted a suppression and containment strategy while new tools for detecting and eradicating the pest were developed. A major factor contributing to the funding uncertainty post-2007 was the programme’s failure to delimit properly the extent of the infestation in southeast Queensland. This is a key, albeit basic, lesson for any eradication programme. However, following delimitation in 2015, the national cost-sharing consortium again demonstrated their commitment in 2017 to a programme that had been in operation for 16 years, at a cost of $A347 million, by approving a ten-year, $A411 million extension.

Lastly, the programme’s successes to date have reinforced the generally accepted biosecurity principle that the earlier detection of an exotic organism, the better the chance of eradication. Three of the seven Australian incursions have been at ports of entry with relatively few colonies detected and all were eradicated. The same applies for the three incursions in New Zealand. The larger incursions in central Queensland at Yarwun in 2006 (71 ha) and Port of Gladstone in 2013 (220 ha) were shown by analysis of import timelines and by genetics to be of less than three years’ duration and both were successfully eradicated.

This contrasts with the situation in the United States and China where the ‘war’ against Red Imported Fire Ant has been lost; the ant is believed to have been present in the US for around 15 years before eradication efforts commenced and in China for 10 years. Taiwan’s two incursions were likely present for 3–5 years .before discovery, and in 2017, it claimed eradication of one of these populations at Chiayi. Recent reverse-spread modelling has confirmed that the initial Red Imported Fire Ant incursions in Brisbane occurred in the early 1990s, about 10 years before its official discovery in 2001 (Daniel Spring, 2019, personal communication). This makes the eradication of the 2001 Port of Brisbane infestation (8300 ha) significant, in that it demonstrates that eradication is achievable even for a long-established population.

The programme is now in the second year of the ten-year eradication programme. This entails a staged approach, with eradication treatments commencing in the west of the known infestation area and moving to the east, while at the same time suppressing populations in areas awaiting eradication and containing spread. Several new initiatives are underway, including engaging the public and businesses in self-treatment to assist the eradication effort, and the development of novel treatment technologies.