Figure 1. Volunteers at the initial working bee in the burnt littoral rainforest.

Introduction. Crowdy Bay National Park is located on the NSW Mid-north coast and comprises coastal landscapes, some of which have were sand mined prior to the area’s acquisition for conservation in the 1970s. Littoral rainforest remnant and regrowth patches occur within the Park and are listed at State level and as Endangered Ecological Community and at national level as a Threatened Ecological Community. The rainforest community type forms in the dune swales, protected by Coast Banksia (Banksia integrifolia) and is dominated over time by Tuckeroo ( Cupaniopsis anacardioides) and Beach Alectryon (Alectryon coriaceus), with other rainforest co-dominants and associated shrubs, vines and groundcovers.

For over four decades,  a regeneration program has been carried out in the park by volunteers working through the National Parks Association (NPA), Mid North Coast Branch. This short summary refers to the condition of one floristically diverse littoral rainforest patch at Kylie’s Beach, half of which was burnt in a spot-wildfire in late 2019 and in which weed managment works commenced 2 years prior to the wildfire due to pre-existing weed issues (Fig 1).

The wildfire and early recovery. The wildfire burnt all the banksias on the foredune crest that were providing wind protection for the littoral rainforest, as well as 1ha of the littoral rainforest. It left the ground layer beneath both areas largely bare. In the areas burnt, all trees appeared dead. With rainfall occurring soon after the fire, post-fire coppicing of rainforest trees and Banksia commenced; with germination of native seedlings occurring with the arrival of heavy rains in December 2020 -January 2021. By mid-autumn 2020 the northern foredune section was thickly covered with colonising Blady Grass (Imperata cylindrica) that provided cover for other successional natives (Fig 2) .

Weed recovery, however, was very rapid. As early as May 2020, the site was a sea of annuals, with abundant Lantana (Lantana camara), Coastal Morning Glory (Ipomoea cairica), Cape Gooseberry (Physalis peruviana), Crofton Weed (Ageratina adenophora) and scatterings of Cape Ivy (Senecio mikanioides) and Tobacco Bush (Solanum mauritianum). Volunteers were at a loss to see how the site could be helped to regenerate. Not having previously worked in a burnt rainforest, the first though was to take out all the weeds. Under the guidance of retired regenerator Tom Clarke from the Australian Association of Bush Regenerators (AABR) however, a different approach was taken.

Figure 2. Blady Grass has covered much of the floor.

Works undertaken. Commencing in May 2020 Sue Baker from NPA and Tom Clarke from AABR conducted monthly working bees to strategically remove weeds. The approach was to  regard the weeds as the new canopy cover and primary colonisers, providing invaluable shade and moisture retention for the regenerating rainforest species. It was agreed that the main initial objective was to see the re-establishment of a canopy, however low, to protect the ground moisture levels and any recovering herb layer. At this point any woody weeds were considered allies in that they were resprouting along with many native pioneer species. Treatment of woody weeds was selective and dependent upon direct competition with native plants. Instead, treatment of weed vines and creepers was targeted, with removal of Morning Glory and Cape Ivy a priority, at least to the edge of the burnt zone.

Subsequently, apart from preventing the spread of Cape Ivy and removing dense infestations of fruiting Cape Gooseberry, the method was to remove weeds only where they were competing with native seedlings with as much removal of their fruits and seeds as possible, followed by thinning out later where helpful. By January 2021, native ground cover had recovered sufficiently to remove the annuals, some of which were 2m high. Over time, the selective treatment of woody weeds has continued as more and more native regen appeared. By taking this approach we have left nature largely to do its own thing with minimal detrimental impact from weeding.

In addition, we have taken the view that the wildfire was not soley a negative; it has also provided an opportunity to address some of the long-standing weed issues in the broader area of Kylie’s Beach including that of Glory Lily (Gloriosa superba) and Golden Wreath Wattle (Acacia saligna) which the fire stimulated to germinate from the soil seed bank in their thousands.

As well as the weed management work, over a kilogram of native seed was broadcast in mid-summer 2020 in the hope it might improve recovery of the ecosystem.

Volunteer visits. After a site inspection tour on 14th May 2020 there have been at least 17 visits to Crowdy Bay National Park where regeneration works has been carried out, not only in the littoral rainforest, but also in the broader Kylie’s beach area. These occurred in May (1 visit), July (3 visits), August (4 visits involving 12 volunteers), September (2 visits), October (4 visits), November (1 visit) and lately in January 2021 (2 visits).

Results to date.  The site has demonstrated itself to have high levels of native resilience, having been in relatively healthy condition apart from per-existing weed infestations. High levels of rain in the 2020-21 summer has promoted extensive and vigorous growth. At February 2021, the forest floor was a carpet of native vegetation and some areas knee-high in dense native grasses. Less care in selecting woody weeds for treatment is now required.

Much of the regeneration is from germinating seeds but some has been from re-sprouting rootstocks, resprouting stems or coppicing from the bases of trees, including rainforest trees (Figs 3 and 4) although some large trees are dead  (See Table 1). With the assisted regeneration work (i.e. strategic weed removal post-fire) the site is quickly shifting from a predominantly weed-dominated post-fire succession to one dominated by native plants.

There is no evidence that the sown seed has yet contributed to the regeneration at this stage.  Native regeneration was occurring across the area prior to the date when germination of sown seed would be expected and it is now clear that additional seed was not required. 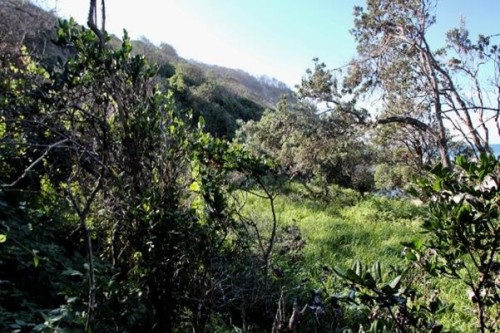 Plans for ongoing management.  The continued wet and humid conditions in summer 2021 have provided highly favorable conditions for regeneration. During 2021 the volunteers will try to keep up with the work at Kylie’s Beach through regular bush regeneration camp outs (as organised for many years, except 2020 which was cancelled due to COVID-19 restrictions). Work plans for the next camp-out have been scheduled to include the Kylie’s Beach littoral rainforest site and will include follow-up treatment of vines and Crofton Weed. Full recovery is likely to take years as the recovery process moves at its own pace.

Two major issues remain – dense ground and canopy cover of coastal morning glory in the area will need meticulous treatment. Also an entire drainage line on the steep, rocky cliff face behind the dune is densely infested with Crofton Weed that must be left in place to stabilize the slope until sufficient native cover takes hold. Volunteers were able to remove flowers from the Crofton Weed for a certain distance up the slope. Contractors will be needed in 2021 to deal with the upper slope.

Acknowledgements: We thank the organisation and leadership of NPA group.  The fact that this was already in place prior to the fire, was a key to the success of the work to date. This group has an outstanding history and connection with many sites in the Park over many years. The linking of AABR to the project provided additional support in project design and facilitating additional volunteer from the ABBR network for the post-fire restoration side of the program.