Posted on 2 May 2021 by teinm | Comments Off on Post-fire assisted regeneration at Rutidosis Ridge, Scottsdale Reserve, Bredbo NSW

Introduction. Scottsdale Reserve is a 1,328-hectare private conservation reserve, near Bredbo NSW, owned and managed by Bush Heritage Australia. For over 100 years prior to purchase in 2006 the property was utilised for grazing and cropping. While most of the higher elevation areas of the property remained intact and offered the basis for improving landscape connectivity for wildlife, the agricultural land use had resulted in conversion of the flats and lower slopes of the property to largely exotic pasture species and accompanying weed.

This case study focuses on one approx 10 ha Apple Box (Eucalyptus bridgesiana) / Snow Gum, (Eucalyptus pauciflora) grassy woodland ridge within the property – named ‘Rutidosis Ridge’ because it is the location of a small population of the Endangered plant species Button Wrinklewort (Rutidosis leptorhynchoides). Set-grazing by sheep as well as some cropping had left the site nearly wholly dominated by the landscape-transforming exotic pasture grasses African Love Grass (Eragrostis curvula) and Serrated Tussock (Nasella tricotoma). Some scattered copses of eucalypts and some herbaceous natives remained, however, suggesting that the site might have some native regeneration potential, but the number and abundance of natives on the site appeared very low and the site was very dissimilar to a nearby healthy reference site (Fig. 1).

Works undertaken. Around a decade after land purchase and the discontinuation of grazing and cropping, Rutidosis Ridge was aerially sprayed during winter with flupropinate herbicide at a low dilution (1L / ha) known to be effective on some strains of African Love Grass and Serrated Tussock without killing native grasses and forbs. While the African Love Grass and Serrated Tussock had died by the following spring as a result of this soil-active herbicide, no substantial native regeneration was observed due to the persistence of the thick thatch of dead African Love Grass (Fig 2).

An intense wildfire passed through the property on 2nd February 2020 (Fig. 3). This largely consumed the thatch, exposing stony topsoils and providing opportunities for regeneration of both natives and weeds that were stored in the soil seed bank.  Anticipating the need for post-fire spot-spray follow-up after the fire to avoid any native regeneration being overwhelmed by weed, Bush Heritage Australia (BHA) collaborated on a program of regular selective treatment of weed with the restoration organisation the Australian Association of Bush Regenerators (AABR). Personnel involved both contractors and volunteers skilled in recognising natives and weeds at seedling stage capable of spot-spraying with negligible off-target damage (Fig 4).

Because the fire had removed African Love Grass thatch and cued germination of natives and weeds, the aim was to treat all weed prior to its seeding.  This allowed the managers to (a) take advantage of the fire’s flushing out the weed soil seed bank and avoid its further recharge and (b) retain maximum open spaces for further natives to emerge and colonise.

During the year after the fire (March 2020-April 2021), the ~10ha site had been subjected to approx. 600 person hours of spot spraying, mainly undertaken by experienced bush regenerators. This commenced in March 2000 and continued at least fortnightly during the growing season. 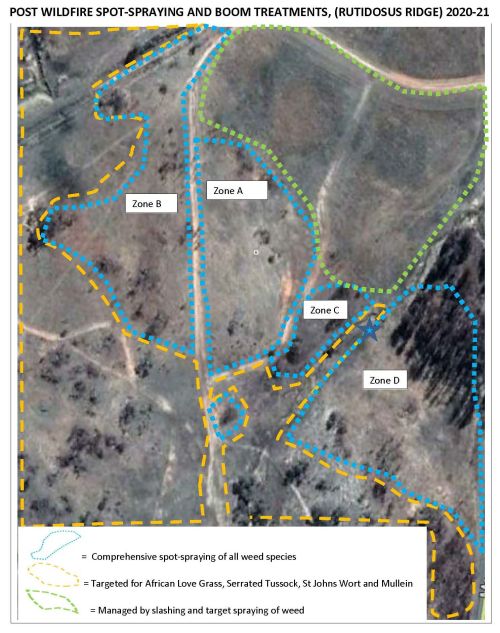 Figure 4. Location of comprehensively spot-sprayed areas and target-weeded areas at Rutidosis Ridge. An opportunity exists to compare differences in richness and cover of natives and weed between the two treatments, ensuring comparisons are confined to within-comparable condition classes.

What we found by 1 year of treatments.  Post-fire observations in  March 2020 revealed Snow Gum resprouting from lignotubers and roots and Apple Box and Candlebark (Eucalyptus rubida) resprouting epicormically.  A wide suite of native grasses and forbs were starting to resprout or germinate alongside diverse herbaceous weeds. Within the first 12 months of regular spot-spraying, the cover and seed production of approx. 30 weed species was very substantially reduced.  Combined with fairly evenly distributed rainfall in the follow 12 months this reduction in weed allowed ongoing increases in native species cover and diversity per unit area, with seed production likely by most native species.  There was negligible off-target damage from the spray treatments. In December 2020 over 50 native herbaceous and sub-shrub species (including at least 11 Asteraceae, 9 Poaceae, 4 Fabaceae and 2 Liliaceae) were recorded within the work zones, with cover of natives very high in the higher condition zones, but plentiful bare ground remaining in the lower condition zones (Fig. 5). 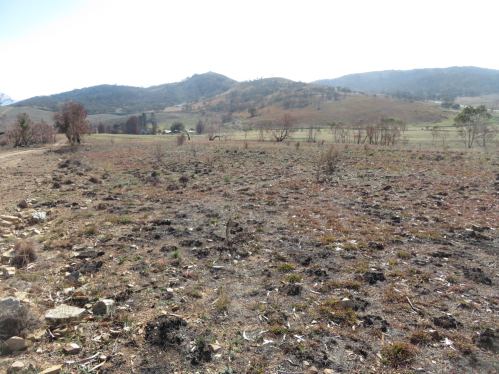 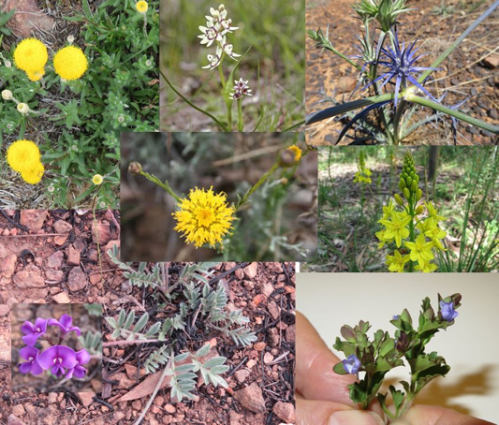 Figure 6. Some of the forbs that flowered on Rutidosis Ridge during the growing season – including the Endangered Button Wrinklework (centre) and Vulnerable Silky Swainson’s Pea.(bottom left). (Photos various.)

Gradient of condition improving over time. As expected, the sites showed a gradient of condition (Fig. 7), with highest natural regeneration capacity retained in the tree clusters and stony crest, perhaps due to these less likely to be less favoured by sheep. (The tree clusters appear not to have been used as sheep camps). By March 2020, 1 year after work commenced, all sites were on a trajectory to move to the next higher condition class, assuming successful Winter 2021 aerial spray re-treatment of African Love Grass.  (Note that, while the pre-fire flupropinate treatment would normally have a residual effect for a few years and thus preventing germnation of this species, massive germination did occur of African Love Grass in many areas, which we speculate was either due to suitable post-fire germination conditions being delayed by the presence of dead grass thatch or to a possible denaturing of the chemical by the fire.)

Figure 7. Condition classes in the Rutidosis Zones A-E revealed during the first few months of treatment. By the end of the growing season and after regular follow up spot-spraying it was clear that all zones comprehensively treated were improving in their native: weed cover ratio except for an increasing cover of African Love Grass, the treatment of which was deferred until a second aerial spray scheduled for winter 2021. (Map: T. McDonald)

Acknowledgements: This project would not have been possible without the help of BHA and AABR volunteers.