A reach of the Cooks River prior to and after naturalisation

Sydney Water have undertaken a project to convert 1.1km of concreted sections of the Cooks River, Sydney Australia, to a more natural state, substantially improving their potential for aquatic function and the provision of services to surrounding residential areas.

The problem and its causes. Seven kms of the highly urbanised Cooks River were concrete lined in the 1940s in an effort to alleviate flooding and reduce water pollution. Since that time the natural values of the river have declined due to pollution and lack of riparian remnant vegetation.

Community interest in the quality of the environment had increased since the 1940s and, the structure of the concrete began to significantly deteriorate, in 2014 Sydney Water removed sections of deteriorated concrete and undertook environmental rehabilitation of parts of the riparian zone.

What we did. Between 2007 and 2013 Sydney Water carried out a masterplanning exercise that included asset inspections, hydraulic analysis, stakeholder consultation and concept design development; in order to identify sites along the river that were suited to renewal and naturalisation (Fig 2).

There was little adjacent native vegetation on which to base the design of the revegetation work, but local botanical surveys had resulted in a conceptual map of the catchment’s pre-existing ecological communities, which allowed the project to select species suited to four different habitat types: 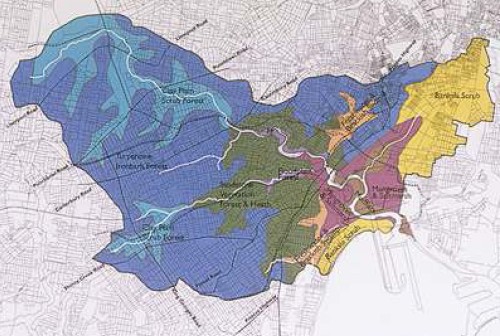 Results. The project resulted in the reconstruction of a diversity of native riparian habitat types and improved connectivity for biota between reaches of the river that were previously disconnected. This resulted in massive aesthetic improvement, with local residents conveying much improved local area pride and positivity. The project provides a social amenity, with the provision of pathways, seating, interpretive signage and provides an opportunity for local communities to reinstate a sense of place and reconnect with each other in the context of a natural river. In addition it represents value for money considering that longer asset life produced by the natural system.

Acknowledgement: This summary was first presented to the Symposium ‘Reubilding Ecosystems’ held at the Teachers’ Federation Conference Centre, Sydney by the Australian Association of Bush Regenerators (AABR)