Introduction. Our 2016 EMR feature reviewed the state of research and practice of ecological restoration in urban environments in New Zealand. We concluded that urban restoration can influence and support regional and national biodiversity goals. We also observed that research effort was light, lacking interdisciplinary breadth and may not be sufficiently connected to restoration practice to ensure long-term success of many projects.

While it is only three years since that review was published, urban ecological restoration continues to grow and evolve, and the policy setting and political context have changed significantly. New threats and opportunities have emerged. The spread of a dieback disease and the more recent arrival of myrtle rust, rapid uptake of Predator Free 2050, emergence of the One Billion Trees programme, a surge in housing and subdivision development, and a potentially more supportive policy framework are all major factors.

Threats and opportunities. Kauri dieback disease is severely affecting urban kauri forests and individual Kauri (Agathis australis) trees in Auckland and other northern North Island urban centres (Fig. 1). Large forest areas adjoining Auckland, including most notably the Waitākere Range and large parts of the Hunua Range, are now closed to the public, preventing access to popular recreational areas. The dieback is caused by a fungus-like pathogen Phytophtora agathicida that is spread through soil movement. The disease may have arrived from overseas although this is uncertain. There is no known cure but research efforts are underway to find a large-scale treatment option.

Myrtle rust (Austropuccinia psidii) was first found on mainland New Zealand in May of 2017, probably arriving by wind from Australia. Myrtle rust threatens many iconic New Zealand plant species in the family Myrtaceae including Pōhutukawa (Metrosideros excelsa), Mānuka (Leptospermum scoparium), Rātā (Metrosideros robusta), Kānuka (Kunzea spp.), Waiwaka (Syzygium maire) or Swamp maire, and Ramarama (Lophomyrtus bullata). These species are all used to a greater or lesser extent in restoration planting or as specimen trees or shrubs in urban centres, depending on amenity or ecological context. Mānuka is widely used as a pioneer or nurse crop for native forest restoration and is critical to the economically important mānuka honey industry. Waiwaka is a feature of many swamp forest gully restoration projects in Hamilton and this would be a significant setback if they were badly affected. The impact of myrtle rust is still not clear but experience from Australia suggests it may take several years before it reaches population levels sufficient to cause significant damage.

Figure 2. With rapid housing developments in New Zealand, it is important that urban restoration projects are well-planned and efficiently carried out to provide residents with greenspaces to benefit their cultural, health and wellbeing practices. [Photo Catherine Kirby]

In response to a range of housing issues characterised by many as a New Zealand housing crisis, the previous and current government has embarked on several major initiatives to increase the housing stock. A $1B Housing Infrastructure Fund (HIF) was established in October 2016 with provision for interest free loans to local government to enable opening up of new large areas of housing. Many urban centres including Auckland, Tauranga, Hamilton and Queenstown made early applications to the fund. Hamilton City Council was successful in obtaining $290.4 M support for a new greenfield subdivision in Peacocke on the southern edge of the city. This subdivision is intended to enable development of some 3700 houses over the next 10 years and 8100 in 30 years. Approximately 720 ha of peri-urban pastoral agricultural land would eventually be developed (See summary). Coupled with this, and already in progress, is the construction of the Southern Links state highway and local arterial road network. The first proposed subdivision Amberfield covers 105 ha and consent hearings are currently in progress. The environmental impacts of the proposal and how they might be mitigated are being contested. In brief, survival of a small population of the critically endangered Long-tailed Bat (Chalinolobos turberculatus) is the main environmental focus but other aspects including the extent of greenspace and ecological restoration required for ecological compensation are being considered (Figs. 2, 3). With strong political pressure to solve the housing crisis in Hamilton and in other urban centres, making adequate provision for greenspace, especially urban forest, and preventing environmental degradation and indigenous biodiversity decline will be a major challenge.

The Predator Free 2050 (PF2050) programme which gained government (National) approval in 2015, aims to eradicate Stoat (Mustela erminea), Ship Rat (Rattus rattus), Norway Rat (Rattus norvegicus) and Possum (Trichosurus vulpecula) from the whole of New Zealand by 2050 (Department of Conservation 2018). PF2050 is now gaining significant traction in urban environments (Figs. 4, 5) with many urban centres having good numbers of community-led projects underway (See PFNZ National Trust map). Crofton Downs in Wellington was New Zealand’s first predator-free community project. Led by Kelvin Hastie this project has effectively reduced predator numbers to the point that some sensitive native birds e.g. Kākā (Nestor meridionalis), have begun to nest in this suburb after an absence of more than 100 years (See RNZ report). Also in Wellington, the Miramar Peninsula (Te Motu Kairangi) has become a focus, because of its advantageous geography, with a goal to make the area predator free by 2019. Possums had already been exterminated in 2006 (www.temotukairangi.co.nz). 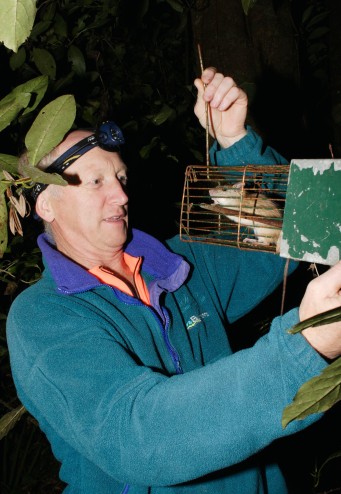 The One Billion Trees (1BT) programme was initiated by the new coalition government (Labour, NZ First, Greens) in 2017 with $238M released in 2018 for planting of both exotic and native trees across mixed land use types. It is not clear yet whether urban forest projects have received funding support but the guidelines suggest there is no reason why restoration of native forest in urban settings would not be eligible. While the emphasis is on exotic tree plantations, native species and long-term forest protection are increasingly being considered as viable options by the newly established government forestry agency Te Uru Rākau.

Research update. Using the same targeted Google Scholar search method as reported in the EMR feature we have found 18 new peer reviewed papers published between 2015 and July 2019 (see updated bibliography) that are strongly focused on restoration in New Zealand urban environments. The single paper noted for 2015 was missed in our previous search. Again, we have not included books, book chapters or grey literature. This compares very favourably with the total 27 papers listed in our 2016 review of which more than half dated from 2009. An increasing publication rate confirms increasing interest and research efforts in aspects of urban ecological restoration. While most of the publications remain in the ecological science realm there are now some informed by other disciplines including engineering, psychology, landscape architecture and health sciences.

Most notably since our 2016 review, a new government-funded (Ministry of Business, Innovation and Employment) research programme, People, Cities and Nature, began in November of 2016. This four-year $823 k per annum research programme ends in October of 2020 unless a funding rebid to be submitted in March 2020 is successful. The programme undertakes multidisciplinary research in nine NZ cities via six inter-related projects: restoration plantings; urban lizards; mammalian predators; Māori restoration values; green-space benefits and cross-sector alliances. While the emphasis was on the ecological science of urban restoration at the outset, the programme has become increasingly involved in understanding the multiple benefits of urban ecological projects including social cohesion and health and recreation benefits. The need to connect restoration research and practice has been met by undertaking multi-agency and community workshops involving researchers and practitioners in five cities to date with a further four scheduled before the programme ends.

Acknowledgements. The People Cities and Nature research programme is funded by the Ministry of Business Innovation and Employment under grant number UOW1601.